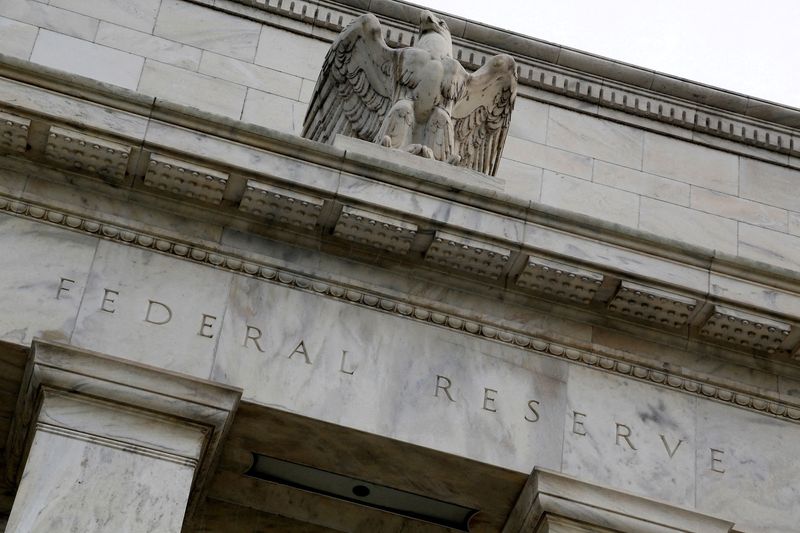 NEW YORK (Reuters) - The Federal Reserve on Wednesday raised its benchmark overnight interest rate by half a percentage point, the biggest jump in 22 years, and said it would begin trimming its bond holdings next month as a further step in the battle to lower inflation.

The U.S. central bank set its target federal funds rate to a range between 0.75% and 1% in a unanimous decision, with further rises in borrowing costs of perhaps similar magnitude likely to follow.

On Wall Street, stocks seesawed after the statement then turned sharply higher after Fed Chairman Jerome Powell said at a press conference that the Fed was not actively considering raising rates 75 basis points at coming meetings.

“I think it’s important to take stock of where we were an hour and a half before the meeting, basically the market was pricing in essentially a 50/50 chance that you see a 75 basis point hike by July, between June and July, and so I think the most important takeaway here that I think the market was really fixated on, was whether or not a 75 basis point hike is on the table, and he (Powell) basically pushed back on that.”

“That doesn’t necessarily mean he won’t do it, but they certainly are strongly indicating that they prefer to just do a series of 50s, even if it’s doing three 50s in a row, maybe four, but it seems like pricing in three 50s is not too far over where the market was at anyway.”

“The key turning point was when he said they were not actively considering 75 bps. At worst, the Fed wants to meet market expectations. At best, they want to go slower or lower than what the market was pricing.”

"It was a little bit of a snoozer. There was nothing too surprising, the Fed really delivered on what the market was expecting.

"Everything the Fed did was pretty much already priced in, nothing here in the text or policy statement from my perspective should be a surprise for investors."

“The Fed floated the idea of a 50 bps rate hike and balance sheet reduction far enough in advance that we’ve already lived through the market hissy-fit before the Fed actually hiked. A key question to me is how long the Fed can maintain quantitative tightening at the pace it outlines. There’s a maturity desert in a couple years with its holdings that it might only be able to shrink its balance sheet by $2 trillion over the next two years and then have to call it quits.”

“It’s a testament to how well they messaged, that you deliver a 50 basis-point hike and there is not so much as a blink in the market. This one has been well communicated and well delivered. I would say very incrementally I found it slightly less hawkish than I thought it would be, it remains to be seen how the press conference goes.”

“But there was no dissent in favor of a larger move and the balance sheet only starts June 1, which I’m not sure why they need to wait another month to begin that, and the move to the full cap takes three months. There were calls to do it on a more constricted timeline, but there is an awareness that they are tightening into a slowing economy and there are risks associated. For the magnitude of the move it has been very uneventful and that is a good thing.”

“The hawks are probably a little disappointed that the balance sheet reduction isn’t starting this month and there will be caps on it at $95 billion. They could have gone more on that, but they’ve given themselves some wiggle room in terms of how much they’re willing to let run off. But the decision was expected, and the reaction has been contained and as expected.”

“I’m going to be looking at the press conference if someone presses Powell on what “highly attentive” means. Is that a signal they’re willing to go 75 basis points at the next meeting? I think the fact they referred to inflation probably tells me they are willing to go faster. But the Fed wants to go where the market’s pricing it, and the market has given them a lot of wiggle room.”

“The Fed has implemented an outsize increase in interest rates at what is only the second hike in this tightening cycle. It now looks like they are engaged in a dash to get rates back to neutral territory by the end of this year.  Their singular focus on trying to control inflation is not only spelt out explicitly – with the committee described as being ‘highly attentive” to inflation – but is also reflected in short shrift given to the Q1 GDP decline and the rapid pace of balance sheet reduction ahead. With inflation pressures ongoing, the risk of monetary tightening prompting a significant growth slowdown or even recession in 2023 is growing.”

“I would think that it shouldn’t rattle markets. I think the most noteworthy part of the statement was the addition of the sentence that says the committee is highly attentive to inflation risks, which just emphasizes the point. We knew that, but choosing to include that in the statement makes very clear which direction they are leaning when they look at the current environment. They are worried about inflation. That came on the heels of an acknowledgement of the supply chain disruptions in China, which are another risk in that direction.”

"Most of what the Fed did today was expected. So I think this could give some breathing room in terms of the market to rally. Of course there's still a question mark as to whether they will resort to a three-quarter-of-a-point hike. I don't suspect that will be the case because I think we should begin to see inflation peak in the next month. So three quarters of a point is, as far as I'm concerned, out of the question. Basically the announcement was in line more or less with what the market was looking for. We have to wait to see when the press conference begins if Powell strikes an even more hawkish tone."

"To nobody's surprise, the Fed delivered their first 50 bps hike since 2000; it was, however, a little surprising that outspoken uber-hawk Bullard didn't vote for a larger increase. Commentary on the balance sheet was also broadly in line with expectations, having been teed up in the March minutes,"

"The FOMC also signaled an aggressive path of further rate hikes, reiterating the recently stated desire to raise rates to their neutral level as soon as possible. However, given the significant amount of hikes already priced into the market - the 2-year trades around 30 bps north of neutral, for instance - the bar for a hawkish surprise was always a high one."

"Hence, although hawkish in its own right, the decision is somewhat dovish compared to the market's lofty expectations, thereby igniting a rally in risk assets, causing the USD to soften a touch, a classic 'buy the rumor, sell the fact' trade, while also sparking demand for Treasuries,"

“The markets, as a whole, are looking at is as expected. It’s not more hawkish than expected. (The Fed is) hewing to the middle ground. No big surprise in the balance sheet work-down. It’s agreeable to markets at this point.”

“Now the information is out there. The guessing is done and people who positioned themselves for a certain outcome, once it happens, can step aside. Now the discussion turns to ‘what’s going to happen at the next meeting?’ That’s the jockeying that’s going on now. The news is out, what does that mean to expectations moving forward?”

“I don’t know what (the Fed is) talking about in terms of (balance sheet) runoff. What’s going to happen, is people are going to extrapolate that at this pace it will be unwound in the next three or four years, whatever it is, and that’s what everyone is trying to assess.”