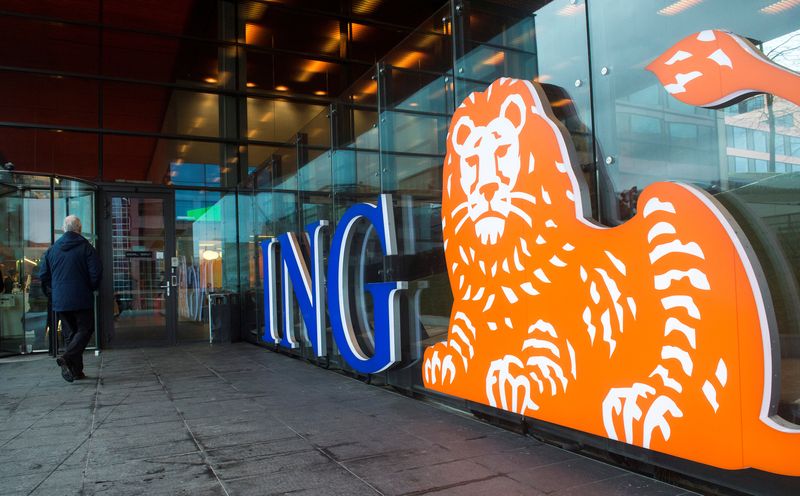 © Reuters. FILE PHOTO: A man walks past the logo of ING Group NV at a branch office in Amsterdam, Netherlands January 9, 2014. REUTERS/Toussaint Kluiters

AMSTERDAM (Reuters) -ING Groep NV, the largest Dutch bank, reported on Friday a worse-than-expected quarterly net income of 429 million euros ($452 million), including a surge in provisions for bad loans due to its exposure in Russia and Ukraine.

Analysts had forecast first-quarter net income at 679 million euros, according to Refinitiv data, while ING reported a net income of 1.01 billion euros in the year-ago period.

"Net additions to loan loss provisions were 987 million euros," the company said. "The geopolitical situation, with the Russian invasion of Ukraine, had a significant impact on the risk costs in this quarter, with 834 million euros of risk costs associated with our Russia-related exposure."

In March, ING had disclosed that it had around 700 million euros in loans affected by sanctions on Russian entities and individuals.

In addition, the company had said it had 5.3 billion euros in loans to Russian borrowers, representing about 0.9% of its total group loan book.

In an update on Friday, the company said it had earmarked 2.5 billion euros in capital in all "to cover for expected and unexpected losses on our Russia-related exposure."

"This consists of the aforementioned 0.8 billion euros of loan loss provisions and €1.7 billion of (capital put aside) on 13.3 billion euros of total credit risk weighted assets on Russia-related exposure."

Outside the Russian impact, the company's results were lacklustre, with income down 2.2% at 4.6 billion euros, mostly due to less money from the European Central Bank's long-term lending programme, where ING borrows at a negative rate.