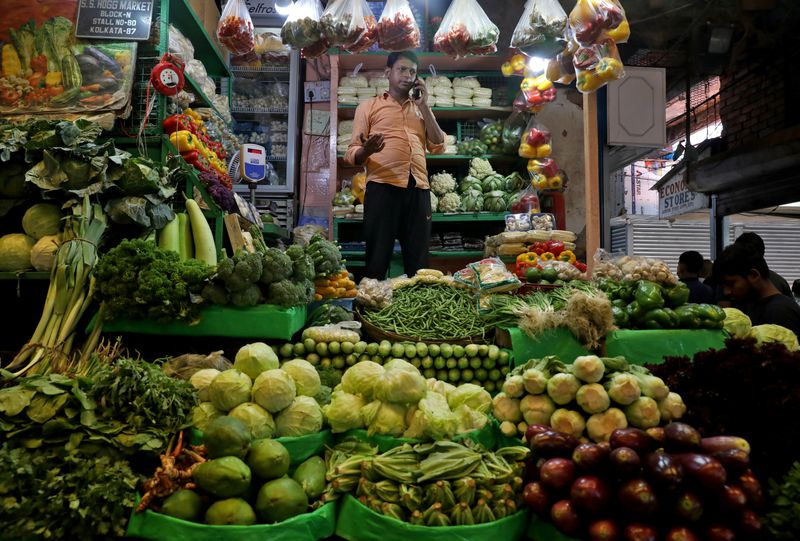 But the dip is expected to be temporary and analysts say the RBI remains on track to keep raising interest rates.

Late last month, the government announced a series of changes to the tax structure levied on essential commodities and trimmed fuel tax to cushion consumers from rising prices and fight high inflation.

Although the full effect is not expected to appear in consumer prices until June, economists say these measures have briefly helped stem the upward trend in prices.

But a sharp spike in prices of wheat, tomatoes, potatoes and other vegetables - key ingredients in every Indian kitchen - will keep inflation elevated. Crop yields are down because of dry spells and heatwaves in northern India.

The June 6-9 Reuters poll of 45 economists showed inflation measured by the consumer price index (CPI) likely slipped to 7.10% in May on a year ago, from 7.79% in April.

"However, food inflation persists to be on a sharply elevated trajectory, especially during the summer months starting from May," he said.

Increasing food prices have become a major concern for households already hit hard by the pandemic.

Food inflation, which accounts for nearly half the CPI basket, rose 8.38% year-on-year in April, the highest in nearly two years. A more than 4% fall in the rupee against the dollar this year has also made imports costlier.

That means interest rates are set to keep rising.

After a surprise 40-basis-point hike at an unscheduled meeting in May, the RBI lifted its repo rate another 50 basis points to 4.90% on Wednesday and said inflation will likely remain above its 6% upper tolerance band until December this year.

"A lot of the current pressures are very much supply-side driven. There's really little that the RBI can do directly to stem any of this in the short run," said Miguel Chanco, chief emerging Asia economist at Pantheon Macroeconomics.