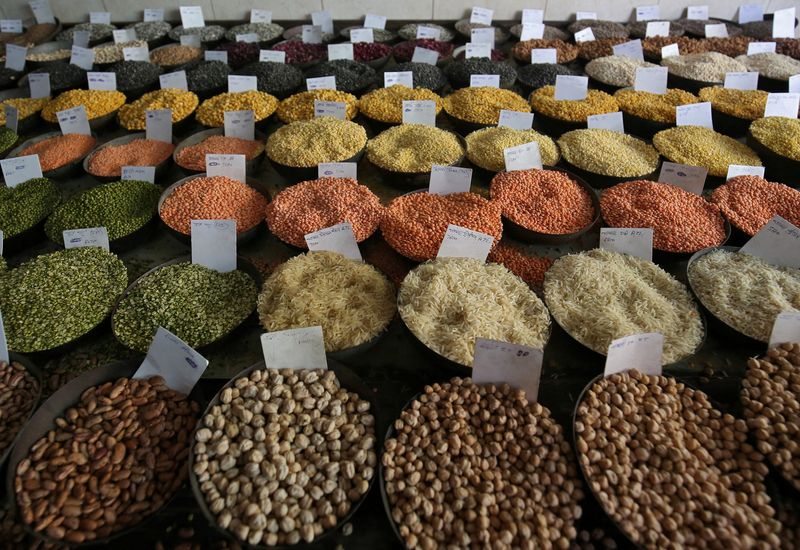 © Reuters. FILE PHOTO: Price tags are seen on the samples of rice and lentils that are kept on display for sale at a wholesale market in the old quarters of Delhi, India, June 7, 2018. REUTERS/Amit Dave

The jump has been long anticipated following the Indian government's decision to wait until after key state elections in March to hike fuel prices. Energy prices globally have soared since Russia's invasion of Ukraine in late February.

Food inflation, which accounts for nearly half the consumer price index (CPI) basket, reached a multi-month high in March and is expected to remain elevated due to higher vegetable and cooking oil prices globally.

These factors likely pushed inflation in Asia's third-largest economy to 7.5% on an annual basis in April, according to a May 5-9 Reuters poll of 45 economists, from 6.95% in March.

If realised, that would be the highest inflation rate since October 2020 and well above the RBI's upper 6% limit.

"CPI inflation appears to have surged higher still in April on the back of higher food and fuel prices. The bulk of the impact of the recent fuel prices hikes will be felt in April," said Shilan Shah, senior India economist at Capital Economics.

To make matters worse, the local price of oil, India's biggest import, has also been subject to upwards pressure from the roughly 4% drop in the rupee this year, with the currency touching a record low on Monday.

Wholesale price inflation was predicted at 14.48%, continuing its double-digit streak for a year.

The elevated price outlook pushed the RBI - which only recently changed its focus to price stability from growth - to hike its repo rate for the first time since 2018, lifting it 40 basis points to 4.40% in a surprise unscheduled meeting last week, with more expected to follow.