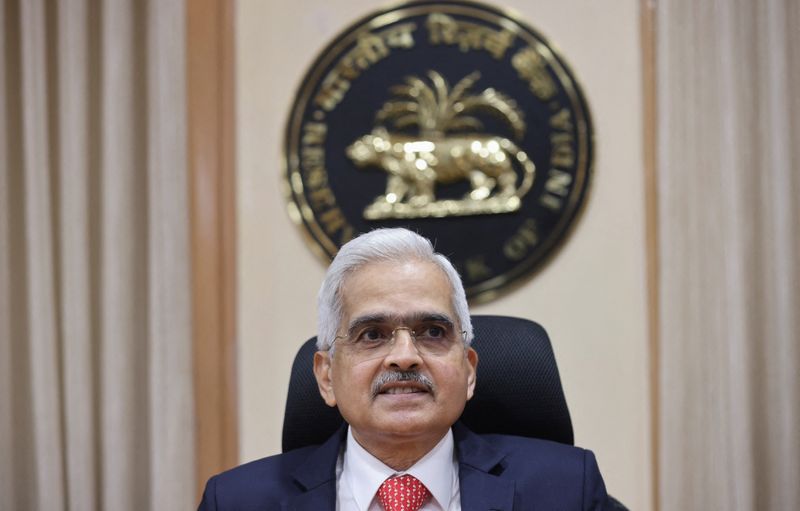 BENGALURU (Reuters) - The Reserve Bank of India's monetary policy committee raised the key lending rate by 40 basis points on Wednesday, in a surprise move, as it sought to take timely and calibrated steps to exit the extraordinary accommodation and contain rapid inflation.

The MPC raised the key lending rate or the repo rate by 40 basis points to 4.40%, Governor Shaktikanta Das said in a virtual address announcing the decision after an off-cycle meeting of the committee on May 2 and May 4.

"From being behind the curve for some time, the Reserve Bank of India (RBI) has taken a big leap to try and bottle the inflation genie.

"A 120 bp increase in inflation forecast in April, change in policy focus to inflation from growth to eventually announcing an inter-meeting 40bp policy rate hike (unanimously at that), the RBI has sent the clear message that inflation needs to be tackled head-on even if it comes at the cost of growth.

"While we have revised up our FY22-23 inflation forecast to 6.0% YOY, we expect the RBI to hike its forecast from current expectations of 5.7% as there are enough and more signs of price pressures, not the least because of supply shocks caused by the Ukraine conflict."

"With the 40bps rate hike, the terminal policy rate is likely to be higher and we expect three more rate hikes this year. Finally, the rate hike also acts as a defence for the rupee ahead of the U.S. Fed's policy announcement."

"The off-cycle 40 bp repo rate hike (price rise) and 50 bp CRR hike is welcome and comes hot on the heels of Reserve Bank of Australia's surprisingly large rate hike and on the eve of U.S. Fed's rate action."

"We should see global central banks' hurried move towards withdrawing accommodation against this background. We expect another 150 bp repo rate hike from RBI this year along with attempts to withdraw excess liquidity."

"More importantly, we should look forward to government actions on the supply side to cool inflation. It will take effort from both policymakers to preserve inflation fighting credibility."

"The combination of a 40 bps repo rate hike and a 50 bps CRR hike is an attempt by the RBI to preempt the rising inflationary pressures and be ahead of the curve.

"The bigger surprise was the CRR hike which indicates the RBI's intent on withdrawing liquidity at a sharper pace.

"While inflation is unlikely to decline in the near term, today's move should help in pushing real rates towards neutral over the next few quarters. Rates across the curve will reprice factoring in a markedly more hawkish RBI. We continue to expect cumulative 100-125 bps of repo rate hikes in FY2023."

"India undertook a two-pronged action in its inter-meeting rate review. The 40bp hike front runs the likelihood of an elevated April inflation release (above 7.5%) and comes close to the heels of above-target inflation in Q1 2022.

"Concurrent move to raise the CRR by 50bp also points to a preference for more durable absorption of liquidity."

"The 'surprise move' by the RBI is not a surprise to me given the turn of events in the past few weeks. The central bank has to take these steps to prevent an extreme fall in the value of our currency and protect financial stability.

"A hike in the policy repo rate and the CRR are the most appropriate steps when the nation is facing galloping inflation and a widening trade deficit. These are a kind of emergency measures to control extreme financial outcomes."

"The off-cycle repo rate hike along with CRR hike comes as a big surprise. While we were expecting a front loading of the rate hikes but the out-of-turn timing of rate actions seems abrupt.

"The inflationary challenges are increasingly rapidly and the need for heavy actions was definitely there. We expect additional 60-75bps more rate hikes for the rest of the year."