'I am the underdog', says UK PM candidate Sunak 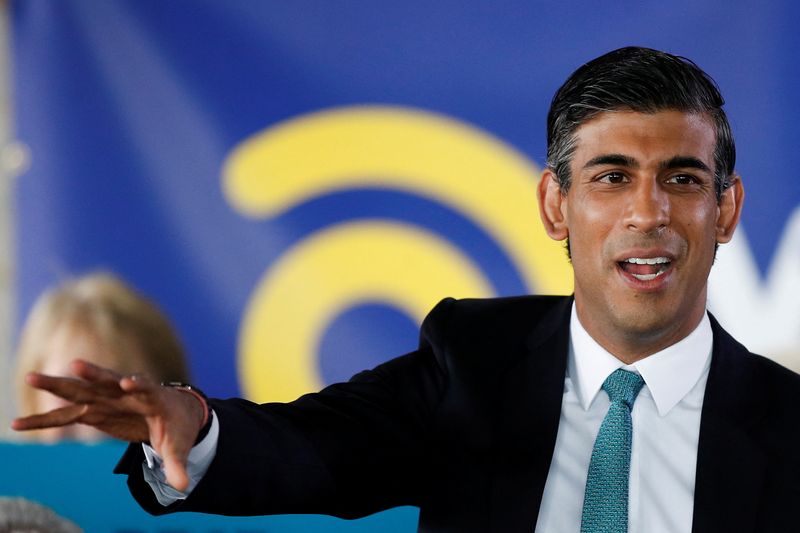 GRANTHAM, England (Reuters) - Former British finance minister Rishi Sunak, one of two remaining candidates to become Britain's next prime minister, on Saturday described himself as the underdog in the contest.

Sunak's resignation helped trigger a revolt that saw Prime Minister Boris Johnson agree to step down after a series of scandals. Members of the ruling Conservative Party will vote for a successor over the summer, with an announcement due on Sept. 5.

Sunak led all rounds of the voting among Conservative Party lawmakers to reduce the field to two candidates.

But it is foreign secretary Liz Truss who seems to have gained the advantage so far among the 200,000 members of the governing party who will ultimately choose the winner.

Truss held a 24-point lead over Sunak in a YouGov poll of Conservative Party members published on Thursday.

"Be in no doubt, I am the underdog," Sunak said in a speech in Grantham, central England, the birthplace of former prime minister Margaret Thatcher.

Truss would be only Britain's third female prime minister after Thatcher and Theresa May while Sunak would be the country's first leader of Indian origin.

"The forces that be want this to be a coronation for the other candidate but I think members want a choice and they are prepared to listen," he said.

So far the focus has been on pledges, or non-pledges, to cut taxes, at a time when many people are struggling, along with defence spending and energy policy.

In his speech Sunak, laid out his Thatcherite credentials, promising careful management of the economy before tax cuts. He criticised as arbitrary Truss' pledge to increase defence spending to 3% of GDP by 2030.

In an interview for Saturday's Times newspaper, Sunak said he would put the government on a crisis footing on taking office.