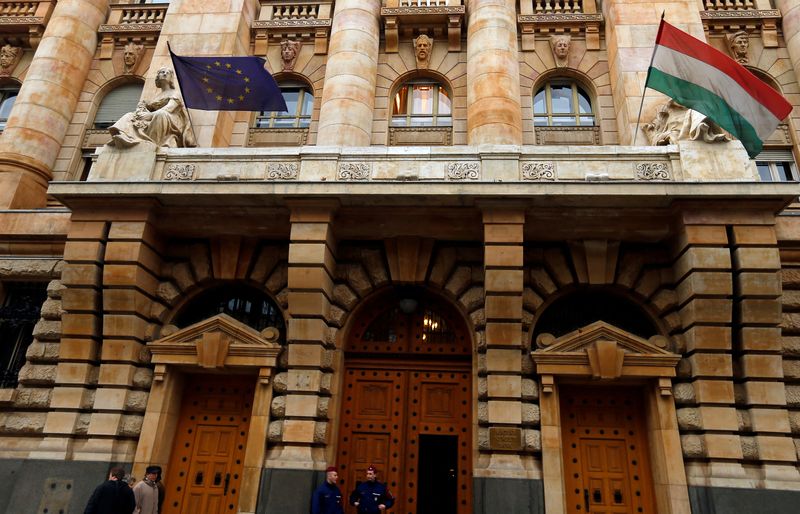 © Reuters. FILE PHOTO: A view of the entrance to the National Bank of Hungary building in Budapest,Hungary February 9, 2016. REUTERS/Laszlo Balogh/File Photo/File Photo

The National Bank of Hungary (NBH) raised its one-week deposit rate by 20 basis points to 3.8% at a tender on Thursday, extending a series of weekly interest rate hikes as it tries to curb rising inflation.

But on Wednesday Orban had said the government would freeze retail mortgage interest rates for a six-month period from January to shield households from higher borrowing costs.

The bank had raised its base rate by 30 basis points to 2.4% last week, its highest level since May 2014, and pledged further rate hikes next year to anchor rising inflation expectations.

The mortgage rate cap and the size of the rate increase, which disappointed some investors, helped to push the forint down 0.3% on the day, putting it within sight of its all-time-lows at 372 per euro hit in November.

"Announcements of PM Orban on the freezing of mortgage rates at their October levels at least until June could considerably undermine efforts ... to tighten monetary conditions," economist Orsolya Nyeste at Erste Bank said in a note.

The central bank's press office did not respond to emailed questions on how the mortgage rate measure would affect the conduct of policy.

Hungarian inflation surged to a 14-year-high of 7.4% in November, above expectations, driven by higher fuel, alcohol and tobacco prices. Services prices increased by 4.6%.

"Despite the (NBH) now having raised (the one-week rate) by 200bp over the course of just over a month, the forint has remained virtually unchanged versus the euro since it began weekly hikes, which leaves the door open for further weekly tightening," economists at Goldman Sachs (NYSE:GS) said in a note.

Analysts polled by Reuters expect the one-week deposit rate to rise to 4.3% by the end of the second quarter, when the mortgage rate freeze is set to expire.

Economists at brokerage Erste Investment said the mortgage rate move, which follows a three-month cap on fuel prices in place since mid-November, harmed the efficiency of monetary policy, as borrowers would be spared the higher costs.

Erste economists said that Wednesday's falls in OTP's shares were overdone in light of the possible financial impact.