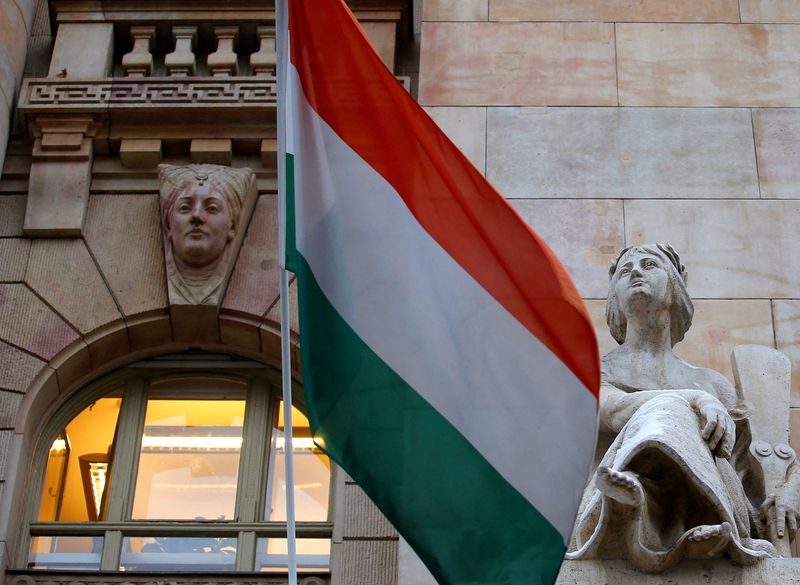 © Reuters. FILE PHOTO: The Hungarian national flag flies on the building of the National Bank of Hungary in Budapest January 10, 2013. REUTERS/Laszlo Balogh

The National Bank of Hungary announced an emergency rate hike last month and introduced a quick deposit facility with an 18% interest rate.

Under the measure outlined on Monday, until March 31, 2023, commercial banks cannot pay an interest rate that is higher than the yield on the three-month discount bill on deposits by investment companies, savings banks, building societies, investment funds and private citizens' deposits of more than 20 million forints ($49,980.01).

These investors made use of high central bank rate and "they realized a risk-free interest rate of up to 18% that was, in the end, paid by the state," Nagy said.

The yield on the three-month discount bill was about 12% on Monday.

The central bank did not immediately respond to questions from Reuters on the new regulation.

"This means that (the government) is neutralizing part of the monetary policy transmission mechanism. There will be a segment of the economy where high interest rates will not apply as some market participants will not be able to access them," Peter Virovacz, senior economist at ING said.

Long-term government bond yields dropped after Nagy's announcement and were about 25 basis points lower on the day by late afternoon, a fixed-income trader in Budapest said. The yield on the 10-year bond was about 7.90%.

"Investment funds started to buy the short end soon after the announcement, and that had an effect on the long end as well," a fixed-income trader in Budapest said.

"Yields first dropped by about 50 basis points, then climbed back 25 points. We do not know the technical details of the new rules yet, so there is a lot of confusion in the market."