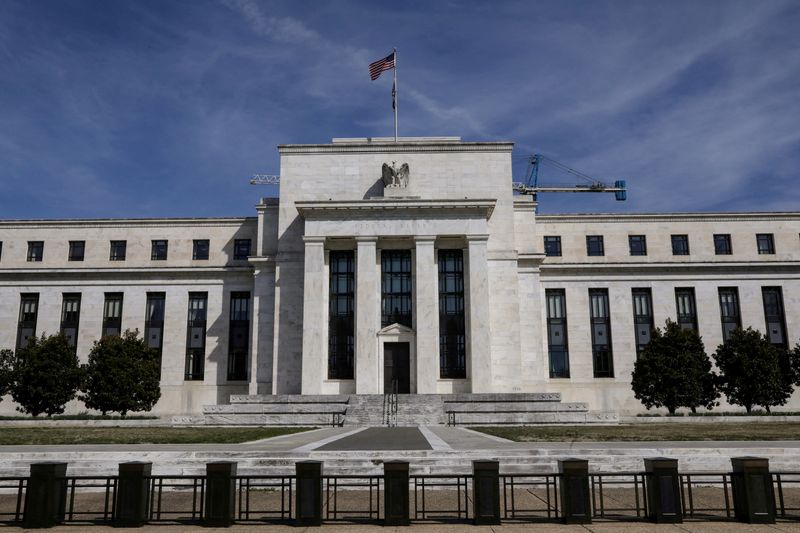 By Howard Schneider and Jonnelle Marte

WASHINGTON (Reuters) -Federal Reserve officials said last month that the U.S. labor market was "very tight" and that the U.S. central bank might need to raise interest rates sooner than expected and begin reducing its overall asset holdings to tame high inflation, according to minutes of their Dec. 14-15 policy meeting.

"Participants generally noted that, given their individual outlooks for the economy, the labor market, and inflation, it may become warranted to increase the federal funds rate sooner or at a faster pace than participants had earlier anticipated. Some participants also noted that it could be appropriate to begin to reduce the size of the Federal Reserve’s balance sheet relatively soon after beginning to raise the federal funds rate," said the minutes, which were released on Wednesday.

The language showed the depth of the consensus that has emerged at the Fed in recent weeks over the need to move against high inflation - not just by raising borrowing costs but by acting with a second lever and reducing the central bank's holdings of Treasury bonds and mortgage-backed securities accumulated during the coronavirus pandemic to hold down long-term interest rates.

The Fed has about $8.8 trillion on its balance sheet.

The probability that the Fed would lift interest rates in March for the first time since the pandemic's onset rose to greater than 70%, as tracked by CME Group's (NASDAQ:CME) FedWatch tool.

That, plus the prospect of the Fed reducing its presence in long-term bond markets, put the U.S. 10-year Treasury yield on course for it biggest weekly rise in a year.

U.S. stocks tumbled to session lows after the release of the readout of last month's meeting showed perhaps even more conviction than investors had expected among Fed policymakers to tackle inflation. The yield on the 2-year Treasury note, the maturity most sensitive to Fed policy expectations, shot to its highest level since early March 2020 when the pandemic-fueled economic crisis was just unfolding.

"This is news. This is more hawkish than expected," said David Carter, chief investment officer at Lenox Wealth Advisors in New York.

The minutes offered more detail on the Fed's hawkish shift in policy last month, put in place to counter inflation running at more than twice the central bank's 2% target.

Along with outlining their inflation concerns, officials said that even with the U.S. labor market more than 3 million jobs short of its pre-pandemic peak, the economy was closing in fast on what might be considered maximum employment, given the retirements and other departures from the job market that have been prompted by the health crisis.

"Participants pointed to a number of signs that the U.S. labor market was very tight, including near-record rates of quits and job vacancies, as well as a notable pickup in wage growth," the minutes said. "Many participants judged that, if the current pace of improvement continued, labor markets would fast approach maximum employment."

Though the views are dated to mid-December, before the current surge in COVID-19 infections took hold in earnest, officials also made clear that the spread of the Omicron variant was not at that point at least "fundamentally altering the path of economic recovery in the United States."

Policymakers in December agreed to hasten the end of their pandemic-era program of bond purchases, and issued forecasts anticipating three quarter-percentage-point rate increases during 2022. The Fed's benchmark overnight interest rate is currently set near zero.

The December meeting was held as coronavirus case counts had begun to climb due to the spread of the Omicron variant.

Infections have exploded since then, and there has been no commentary from senior Fed officials yet to indicate whether the changing health situation has altered their views about appropriate monetary policy.

Fed Chair Jerome Powell will appear before the Senate Banking Committee next week for a hearing on his nomination for a second four-year term as head of the central bank, and is likely to update his views about the economy at that time.