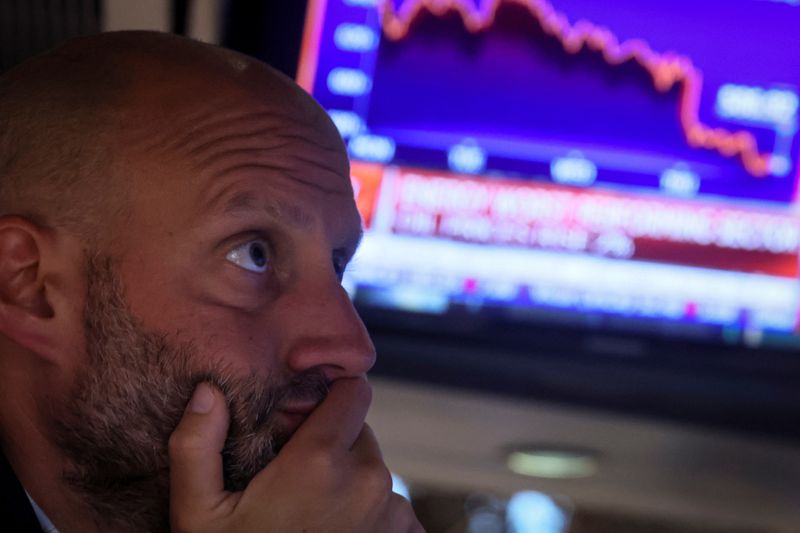 © Reuters. A Specialist trader works inside a booth on the floor of the New York Stock Exchange (NYSE) in New York City, U.S., June 16, 2022. REUTERS/Brendan McDermid

Among the eye-catching moves from monetary authorities in recent days have been a 75-basis-point increase from the Federal Reserve - the largest U.S. rate rise in nearly three decades - the Swiss National Bank’s first hike in 15 years and another 25-basis-point increase by the Bank of England.

Investors are bracing for more bold moves. In the United States, Fed funds futures on Friday were pricing in a 44.6% chance that the fed funds rate will reach 3.5% by the end of the year, from the current 1.58% level, according to the CME's FedWatch. That probability was less than 1% a week ago.

The increasing hawkishness has fueled wild moves in global markets, as central banks rush to unwind the monetary support measures that have helped propel asset prices higher for years.

Worries that the Fed's aggressive rate hike path will push the economy into recession have grown in recent days, slamming stocks – which entered bear market territory earlier this week when the S&P 500 extended a decline from its record to more than 20%. The index’s 6% decline this week has put it on pace for its worst weekly drop since March 2020.

Europe’s Stoxx 600 index is down about 17% this year, while Japan’s Nikkei share average is off about 10%.

Markets have revamped European Central Bank rate hike bets since last week’s ECB meeting, with the ECB now expected to deliver a 25-bps hike in July and at least one 50-bps hike by September. Some economists believe that plans to create a new tool to contain bond market stress should allow the central bank more scope to deliver aggressive rate hikes if needed.

In Australia, futures show markets braced for the benchmark cash rate, currently 0.85%, breaching 4% next year against central bank officials' guidance for a peak in rates around 2.5%.

Britain's benchmark rate is now at its highest since January 2009, when borrowing costs were slashed as the global financial crisis raged. It was the fifth time the BoE has raised rates since December when it became the first major central bank to tighten monetary policy following the COVID-19 pandemic.

Overall, global central banks have already raised rates 124 times so far this year, compared with 101 increases for all of 2021 and six in 2020, according to data from BofA Global Research.

One notable exception to the trend has been the Bank of Japan, which has stuck with ultra-easy settings and a vow to buy 10-year bonds every day to anchor borrowing costs.

Yet speculators who've bet on an ultimate capitulation do not seem particularly deterred. The Japanese yen is sliding, the yield curve is being bent out of shape and the bond market is almost buckling in the tussle between hedge funds and policymakers.

Tighter monetary policy is coming on the heels of the worst inflation many countries have seen in decades. U.S. consumer prices, for instance, grew at their fastest pace since 1981 in May.

Higher rates, soaring oil prices and market turmoil are all contributing to the tightest financial conditions since 2009, according to a Goldman Sachs (NYSE:GS) index that uses metrics such as exchange rates, equity swings and borrowing costs to compile the most widely used financial conditions indexes.

Tighter financial conditions may translate to businesses and households curtailing plans for spending, saving and investing. A 100-basis-point tightening in conditions cuts growth by one percentage point in the following year, according to Goldman.