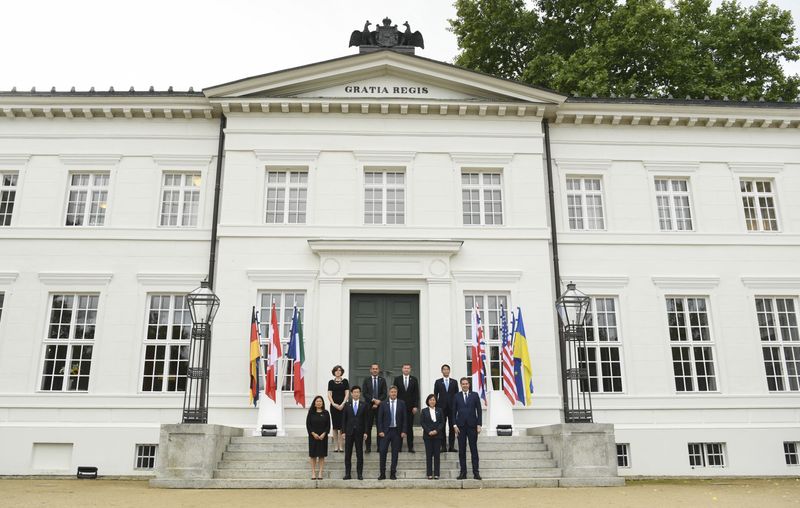 LONDON (Reuters) - Japan may seem like a lonely voice in the Group of Seven pleading for some currency calm, but the rest may be taking more notice than first appears.

Nearly every other economic and political metric these days seems to have returned to the 1980s - so thoughts of significant G7 currency market intervention seem less outlandish against that backdrop.

The U.S. dollar's index has only recorded year-on-year gains at the current 20% pace on four other occasions since its historic surge in 1985 prompted the then G5 powers to collectively intervene to cap the rampant greenback.

Those four extreme dollar surges came during the early 1990s European exchange rate crises; the euro's swoon in 2002/2001 after the launch of the single currency; the aftermath of 2008's banking bust; and the oil collapse of early 2015.

At least two of those moments involved some form of G7 or G20 action to calm the horses.

Is there a case for it to happen again?

Reinvigorated as an effective governing council for the world's major democracies at a time of fractious geopolitics, the G7 may have other more urgent battles to fight right now.

G7 finance ministers' latest virtual meeting this month focused squarely on plans for a price cap on Russian oil as another sanction on Moscow for its invasion of Ukraine and as a way to limit soaring energy costs and the inflation that unleashed.

There was no discussion of the alarming acceleration of the dollar against Japan's yen, the euro and Britain's pound to its highest levels in decades - or the added stress that creates on dollar-priced energy imports into those countries, which in turn compounds both inflation and the economic hit there simultaneously.

Heralding growing yen anxiety in Tokyo ever since, Japan's finance minister Shunichi Suzuki made repeated verbal protests against excessive currency moves on the sidelines of the meeting - adding he would coordinate any response with his allies.

Yet, no mention of exchange rates found its way into the very single-issue communique.

Similarly, a more wide-ranging statement from the G7 leaders summit in Germany at the end of June seemed to bat away currency issues as a background issue, making only passing reference to long-standing language on the desire for stable exchange rates.

But as Europe and Japan face blistering dollar energy bills this winter and Europe's central banks at least chase an increasingly hawkish Federal Reserve in lifting interest rates, the soaring dollar is a dangerous irritant to their ability to navigate what now seems like a full-blown energy and economic war with Russia.

And if, as the World Bank restated on Wednesday, the risk of global recession is rising rapidly, then a soaring dollar is an aggravator both for Europe and Japan as well as many more fragile developing economies heavily borrowed in dollars.

Warning of "spillovers" from "synchronous" tightening, that it said could mean a further two percentage points of interest rate rises from major central banks, the World Bank study said the global economy was already in its steepest slowdown following a post-recession recovery since 1970.

Since G7 leaders met in June, the dollar has added another 5%-6% alone.

But the impact has already been registered both in inflation rates as well as rapidly deteriorating trade deficits in the euro zone, Japan and Britain.

In what seems like a world turned upside down for traditional surplus economies of the ageing euro zone and Japan, both on Wednesday recorded exploding trade gaps during the summer as energy import prices and the dollar climbed in tandem.

Japan ran its biggest single-month trade deficit on record in August while the euro zone's external trade balance was in deficit for the 9th month in a row, with the euro deficit in the year to July as high as 177.4 billion euros, compared with a surplus of 121.3 billion euros in the same period last year.

While Britain may be familiar with chronic external deficits, the soaring cost of dollar-priced fuel imports has already blown its current account gap out to a record share of GDP this year.

The problem for the G7 nations, whose finance ministers and central bankers meet again at the annual International Monetary Fund meeting in Washington early next month, is that this is starting to have a spiralling effect.

The European Central Bank has already started to publicly cite a weak euro/dollar as a problem in its fight against inflation and Bank of England chief Andrew Bailey continually points to the outsize strength of the dollar.

And so while the Bank of Japan steps up threats of intervention against the yen, it may start to get a more sympathetic ear from its allies next month.

While the United States may see the benefits of a higher dollar at the margin - these should pale against the threat of global stress and recession and the need for solidarity in an economic war with Russia.

Echoes of the 1980s reverberate.

The opinions expressed here are those of the author, a columnist for Reuters.