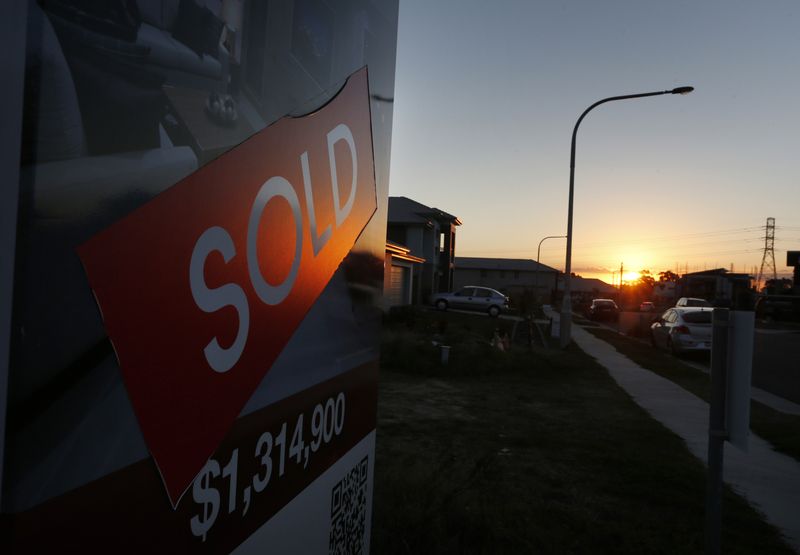 © Reuters. FILE PHOTO: New homes and land for sale are pictured in southern Sydney August 14, 2014. More wealthy Chinese are moving their money out of China to invest in Australia's property market as the corruption crackdown in Asia's biggest economy gathers moment

SYDNEY (Reuters) - This April, Australian home repairman Reis Saki put his parents' house on the market in Melbourne's outskirts, with hopes of a quick sale so they could move closer to family and health services.

But six weeks and two interest rate hikes later, he withdrew the listing after receiving no offers, despite a 10% reduction in the asking price from what had been an average amount for similar properties in the area.

"It was just nothing, nothing at all," Saki, 45, told Reuters by phone. "I was really losing my cool."

His experience reflects a rapid reversal in Australia's A$2 trillion ($1.40 trillion) housing market which, after surging through the pandemic, has entered what many economists say is a downturn due to aggressive rate hikes from a central bank determined to squash runaway inflation.

Pandemic-related savings and stimulus payments helped push up house prices nationwide by a quarter in 2021 alone. But now, little more than half of the properties being auctioned are selling in most main cities, down from three quarters as recently as March.

Property prices in Sydney, the world's second-most expensive housing market after Hong Kong by some measures, have fallen 4.7% since April, according to CoreLogic, the fastest decline in four decades.

"The boom was made possible by a shift from very high interest rates 30 years ago to recently very low interest rates, and that's now being reversed," said AMP (OTC:AMLTF) Chief Economist Shane Oliver, who expects house prices to drop 15% to 20% from the peak of early 2022 to 2024.

With the Australian government warning inflation has yet to peak, most economists expect more rate hikes in coming months - the next is expected on Tuesday.

Sellers are facing multiple headwinds, from competition to souring buyer sentiment. Since home owners typically favour selling in spring, a surge of listings next month may add to the pressure, economists say.

Meanwhile, after deferring loan payments from pandemic-impacted home owners, lenders have resumed "mortgage enforcement" activity like filing for repossession from people in default, according to court data.

In the first six months of 2022, property repossession filings in Australia's three most populous states totalled 997, up 56% from a year earlier. That was still well below pre-pandemic levels but signals mortgage stress, borrower advocates said.

"There are letters of demand being issued, especially from the second and third tier lenders," said Claude Von Arx, a financial counsellor at the Consumer Action Law Centre.

SQM Research said property advertisements with phrases like "mortgagee in possession" or "bank forced sale" hit a record low of 5,500 in April, the month before rates began rising, from about 15,000 pre-pandemic. By mid-July, the number had risen 10%.

"We're in a new environmnent where we've got rising interest rates and we no longer have those banking moratoriums, so our expectation is that those numbers are going to sigificantly rise and at least get back to where we were prior to COVID," said SQM Managing Director Louis Christopher.

People facing forced sales or eviction now make up a quarter of the caseload at Mortgage Stress Victoria, a service for people struggling with payments, from 5% in early 2022, said legal director Matthew Martin.

The Big Four banks - Commonwealth Bank of Australia (OTC:CMWAY), National Australia Bank (OTC:NABZY) Ltd, Westpac Banking (NYSE:WBK) Corp and Australia and New Zealand Banking Group Ltd - said they had not experienced a rise in mortgage enforcement, a sign the change is being driven by non-bank and subprime lenders - which lend to riskier customers for higher charges - which have a quarter of the market.

Australian Banking Association CEO Anna Bligh said repossessions remained at an all-time low due to a decade of initiatives to support customers in hardship, and "longer term data trends should always be considered alongside any shorter snapshots".