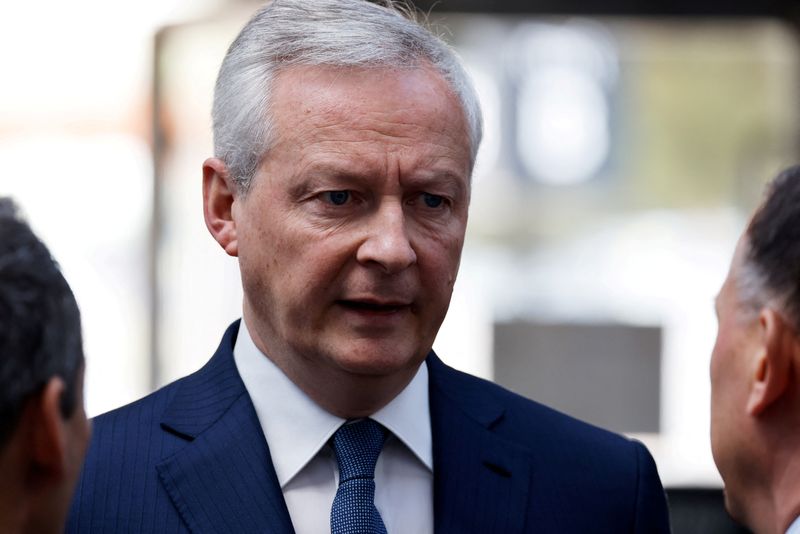 © Reuters. French Minister for Economy, Finance, Industry and Digital Security Bruno Le Maire looks on during a French president's visit to the Eurosatory land and airland defence and security trade fair, at the Paris-Nord Villepinte Exhibition Centre in Villepint

PARIS (Reuters) - French Finance Minister Bruno Le Maire told France 2 television on Tuesday that the rise in U.S. bond yields showed that the "era of cost-free money" was over.

Le Maire added it wold cost France several billion euros to pay back its debt to the market, which showed that importance of sticking to a "balanced and coherent" fiscal policy.

U.S. equities tumbled on Monday, with the S&P 500 confirming it is in a bear market, as fears grow that the expected aggressive interest rate hikes by the Federal Reserve would push the economy into a recession. [.N]

Last week, the European Central Bank (ECB) ended a long-running stimulus scheme and said it would deliver next month its first interest rate hike since 2011, followed by a potentially larger move in September.

The ECB, facing a euro zone inflation at a record-high of 8.1% and which is still rising, now fears that price growth is broadening out and could morph into a hard-to-break wage-price spiral, heralding a new era of stubbornly higher prices.

Data published last month showed the French economy unexpectedly shrank in the first quarter as consumers struggled to cope with surging inflation that reached a record-high rate of 5.8% over 12 months in May.

Nevertheless, Le Maire has said he expects France to have positive economic growth for 2022.