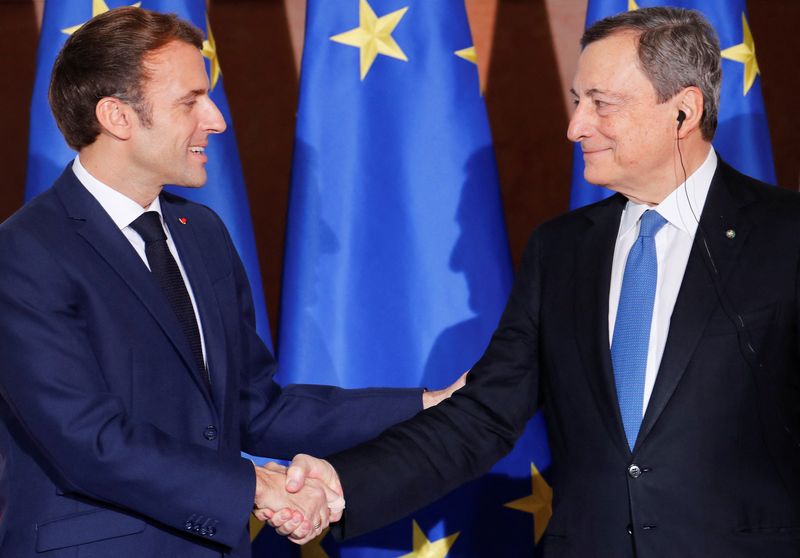 © Reuters. FILE PHOTO: French President Emmanuel Macron and Italy's Prime Minister Mario Draghi shake hands during a news conference after signing an accord to try to tilt the balance of power in Europe, at Villa Madama in Rome, Italy, November 26, 2021. REUTERS/Rem

PARIS (Reuters) -France and Italy called on Thursday for the European Union's fiscal rules to allow more leeway for investments that would help the 27-nation bloc become greener and more self-sufficient in a post-pandemic world.

EU budget rules safeguard the value of the euro by setting limits on government deficits and debt. Since they were set up, they have grown increasingly complex and the EU is now thinking how to change them to better fit new economic realities.

The main challenges are how to cut government debt that has surged during the COVID-19 pandemic without stifling growth, and how to provide incentives for massive investment needed to fight climate change and to make supply lines more secure after global lockdowns exposed their fragility.

"There is no doubt that we must bring down our levels of indebtedness," Italian Prime Minister Mario Draghi and French President Emmanuel Macron said in a joint article in the Financial Times.

"But we cannot expect to do this through higher taxes or unsustainable cuts in social spending, nor can we choke off growth through unviable fiscal adjustment," they said.

The two leaders wrote that their strategy was instead to curb recurrent public spending through "sensible" structural reforms and that EU fiscal rules should not prevent them from making necessary investments.

EU fiscal rules do not give any special treatment to investment now, and France and Spain proposed in September to exempt "green" investment, and possibly also money spent on digitalising the economy, from EU deficit calculations.

Some northern EU countries disagree, worried it will be hard to define what constitutes an investment to fight climate change.

France has also said the EU should better secure its economic sovereignty by moving production of some key items to Europe, as COVID-19 lockdowns showed disruptions in supplies from China - where much of Europe's pharmaceuticals and chips come from - can be devastating.

"We need to have more room for manoeuvre and enough key spending for the future and to ensure our sovereignty," Macron and Draghi wrote in the op-ed.

"Debt raised to finance such investments, which undeniably benefit the welfare of future generations and long-term growth, should be favoured by the fiscal rules, given that public spending of this sort actually contributes to debt sustainability over the long run," they wrote.