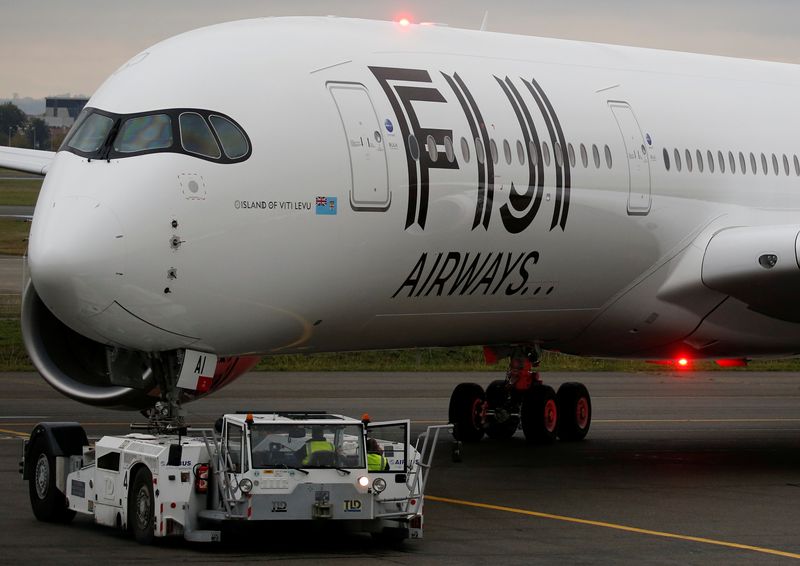 © Reuters. The first Airbus A350 XWB aircraft of Fiji Airways prepares to take off at the aircraft builder's headquarters of Airbus in Colomiers near Toulouse, France, November 15, 2019. REUTERS/Regis Duvignau/File Photo

SYDNEY (Reuters) -Fiji Airways expects to reach nearly 100% of its pre-pandemic capacity by the end of the year, as demand for travel to its tropical Pacific home has rebounded strongly, a senior executive said on Tuesday.

The carrier's capacity from Fiji to Australia and North America is at around 120% of pre-pandemic levels, said the airline's executive manager for strategy, networks and alliances, John Checketts. Capacity on New Zealand routes should reach 100% by the end of the year, he added.

Routes to Hong Kong and Japan, however, have been paused due to travel restrictions, Checketts said at a CAPA Centre for Aviation conference.

"In terms of capacity, we are nearly at 100% of our pre-COVID capacity by the end of the year," Checketts said. "We've had to pivot our capacity to where there is demand."

Demand from places such as Australia and the United States had been strong despite ticket prices being above pre-pandemic levels to help cover higher fuel costs.

"Fares have had to come up, and we have seen that industry-wide," Checketts said. "Hopefully fuel prices will start to come back down and we can stimulate even more travel."