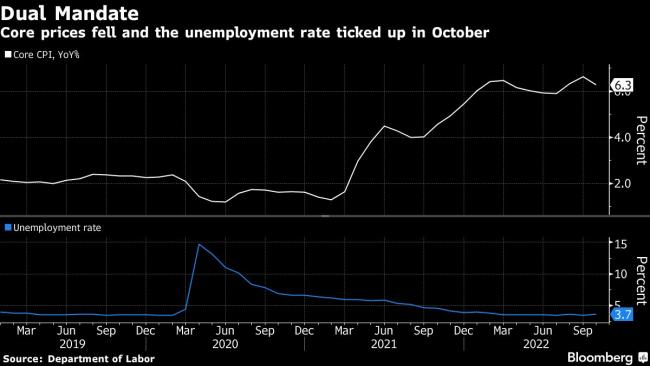 (Bloomberg) -- Federal Reserve Bank of San Francisco President Mary Daly said 4.75% to 5.25% was a “reasonable” range for where policymakers could lift interest rates and then go on hold.

“Somewhere between 4.75 and 5.25 seems a reasonable place to think about as we go into the next meeting,” Daly said in a Wednesday interview on CNBC. “And so that does put it in the line of sight that we would get to a point where we would raise and hold.”

US central bankers have raised rates by 75 basis points at four consecutive meetings to curb the highest inflation in four decades. Their benchmark federal funds rate is now in a range of 3.75%-4%.

Some Fed officials have said it may be time to start moderating the pace of rate increases following a report last week that showed a slowdown in consumer inflation.

Daly said that while the strategy is to raise rates and then hold for a time, that did not mean they were close to ending their tightening campaign.

“Pausing is off the table right now, it’s not even part of the discussion,” she said. “Right now the discussion is, rightly, in slowing the pace.”

Daly also said officials are turning their focus to how high the benchmark interest rate will ultimately need to rise to in order to be “sufficiently restrictive.”

Investors expect the central bank to moderate its next rate hike to 50 basis points when officials meet Dec. 13-14 and see rates peaking around 4.9% by mid 2023.

“One month of data does not a victory make, but those were some positive signs,” Daly said. “These things getting better are encouraging, as is a slower labor market. But we need to get more of that to be sure and confident that inflation will come down to our price stability goal in any reasonable amount of time.”

The unemployment rate may need to rise to 4.5-5% in order to bring down wage growth and inflation, Daly said. The jobless rate rose slightly to 3.7% in October but remains near a 50-year low.