Fed’s Bullard Says Rates Are Getting Closer to Sufficiently High 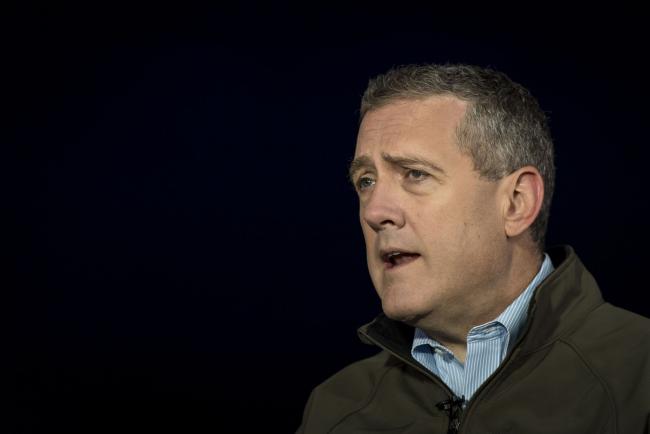 (Bloomberg) -- Federal Reserve Bank of St. Louis President James Bullard said interest rates are getting closer to a high enough level to bring down inflation, suggesting he’s comfortable with policymakers’ projections of how much further they will hike this year.

Bullard, in a presentation Thursday to business leaders in St. Louis, pointed to optimistic signs that price gains could slow further this year and that the central bank may succeed in taming the strongest inflation in a generation.

His remarks also stopped short of hammering home the hawkish tone he delivered through much of last year, when he was ahead of peers in advocating for the US central bank to take more aggressive moves to cool prices.

“The policy rate is not yet in a zone that may be considered sufficiently restrictive, but it is getting closer,” Bullard said in the slide deck. A chart in his presentation suggested that Fed officials’ median projection for where rates will end this year, at 5.1%, is in the territory of being restrictive enough to rein in inflation.

Bullard’s presentation didn’t specify how high he prefers rates to rise or indicate whether the Fed should again slow its pace of rate hikes at the next meeting.

The St. Louis Fed chief said the central bank’s actions have helped to lower inflation expectations to a level “consistent with the Fed’s 2% inflation target.” He said he also sees inflation falling to a lower level this year as the economy “normalizes.”

Fed officials raised rates by a half point last month, slowing down after four straight 75 basis-point hikes while extending the most aggressive tightening campaign since the 1980s. That brought the target on its benchmark rate to a range of 4.25% to 4.5%.

Officials also issued fresh forecasts that showed they expect policy to remain tight this year, with 17 out of 19 officials projecting rates above 5% by the end of 2023. No Fed official forecast rate cuts this year.

Minutes of the Fed’s Dec. 13-14 meeting, released Wednesday, showed that policymakers last month affirmed their commitment to bringing down inflation. Officials also warned against an “unwarranted” loosening of financial conditions, which suggested frustration that markets could undermine their efforts to tame prices.

Several Fed officials this week have reiterated their concerns that inflation is still too high, with Kansas City Fed President Esther George saying earlier Thursday that she sees the federal funds rate remaining above 5% well into 2024.

“I see staying there for some time, again, until we get the signals that inflation is really convincingly starting to fall back toward our 2% goal,” George said Thursday in an interview on CNBC television.

That followed remarks from Atlanta Fed President Raphael Bostic that inflation is still “way too high” and remains the biggest headwind in the US.

“I appreciate recent reports that include signs of moderating price pressures, but there is still much work to do,” he said at a Fed conference in New Orleans Thursday.

Minneapolis Fed President Neel Kashkari said in an essay Wednesday that he projects rates will rise to 5.4%.