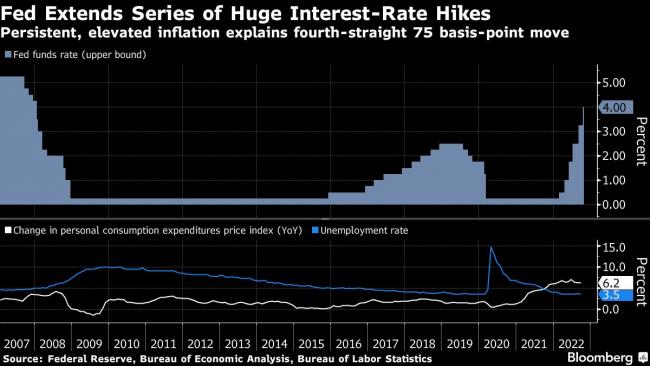 (Bloomberg) -- After dealing with a largely friendly Congress over the past two years, Federal Reserve Chair Jerome Powell faces rising tensions over his policies as Democrats warn about job losses while Republicans continue to press on the importance of stable prices.

North Carolina Republican Patrick McHenry -- who’s in line to lead the House Financial Services Committee after the GOP won control of the chamber in the midterm elections -- has called for the Fed to stay focused on controlling inflation. Democrats, who retained the Senate, have begun to voice concerns that higher borrowing costs will hurt jobs and potentially cause a recession.

During their control of Congress in the past two years, Democrats have offered mostly what analysts said was unusually light questioning of the Fed’s policy blunder: misjudging the persistence of inflation and waiting too long to attack it. That gave prices a ramp to run up at the fastest pace in 40 years.

“There hasn’t been a lot of scrutiny that has been very targeted at the Fed’s management of monetary policy,” said Ian Katz, a financial policy analyst at Capital Alpha Partners. “Democrats don’t want to talk about inflation.”

However, the economic fallout from its aggressive rate hikes -- aimed at fighting the inflation surge that Republicans frequently cited in their campaigns and blamed on Democrats -- has begun to draw sharper criticism from some corners of the Democratic party.

And while McHenry has been friendly toward Powell and comes with an agenda targeting financial-regulation priorities, Republican staff on the committee said they’re also interested in examining how the Fed misjudged inflation pressures.

The changing landscape could test the relationships that Powell has worked to build with lawmakers through regular meetings and calls.

California Representative Maxine Water, the House panel’s outgoing chair, sent Powell a letter this month after the Fed’s fourth consecutive 75 basis-point increase, saying “enough is enough,” and warning that an over-correction on rates could tip the economy into a recession.

Powell has also received warnings from Senate Democrats such as John Hickenlooper of Colorado, who warned in a letter that Fed actions could “undermine economic growth and harm American families.” Banking Committee Chair Sherrod Brown, an Ohio Democrat, cautioned Powell to “not lose sight of your responsibility to ensure that we have full employment” while fighting inflation.

Massachusetts Democrat Elizabeth Warren has raised similar concerns while also slamming the Fed over ethics lapses including a trading scandal, and Brown introduced a bill this year to strengthen trading restrictions.

In contrast, when Powell last testified before the House panel in June, McHenry said: “The Fed should be focused on price stability. That should be their single-minded focus at this moment in time.”

McHenry acknowledged that the Fed’s inflation projections were wrong while also saying he’s confident the central bank “is taking this emergency seriously” and moving to curb prices. He had harsher words for Democrats, attributing inflation to their “wasteful spending.”

Sarah Binder, co-author of a book on the Fed and Congress, said split party control of the two chambers historically hasn’t resulted in major reforms that impact the Fed.

But Binder said there is a common pattern in such situations: the minority party, as in the case of Democrats the House in the next session, “does ramp up its threats against the Fed when the economy is in the dumps.”

President Joe Biden, for his part, has offered his endorsement of the Fed’s rate hikes and stressed the central bank’s independence, in contrast with GOP predecessor Donald Trump’s relentless criticism of Powell -- his own pick for Fed chair -- for keeping interest rates too high in 2018 and 2019.

Of course, much depends on how the Fed achieves its mandate of maximum employment and stable prices over the next two years.

Economists surveyed by Bloomberg see a recession as more likely than not in the next 12 months. While October retail sales data on Wednesday suggested consumers remain resilient, some companies describe conditions that make it seem like a downturn is on the doorstep.

Right now, Powell is leading the charge toward even higher interest rates than officials forecast in September, with markets pricing in a peak near 5%, up from the Fed’s current target range of 3.75% to 4%. Yet recessions can unwind business spending and hiring plans suddenly, resulting in downturns that are often more severe than forecasters -- or Fed officials -- expect.

The Fed will be an easy target for lawmakers if a downturn results from their tightening campaign, if only because their earlier misstep helped give inflation a head start.

“Consumers are feeling the volatility, and the business community is going to be angry” if the economy tips into a recession, said Christopher Whalen, chairman of Whalen Global Advisors, a financial consulting firm.