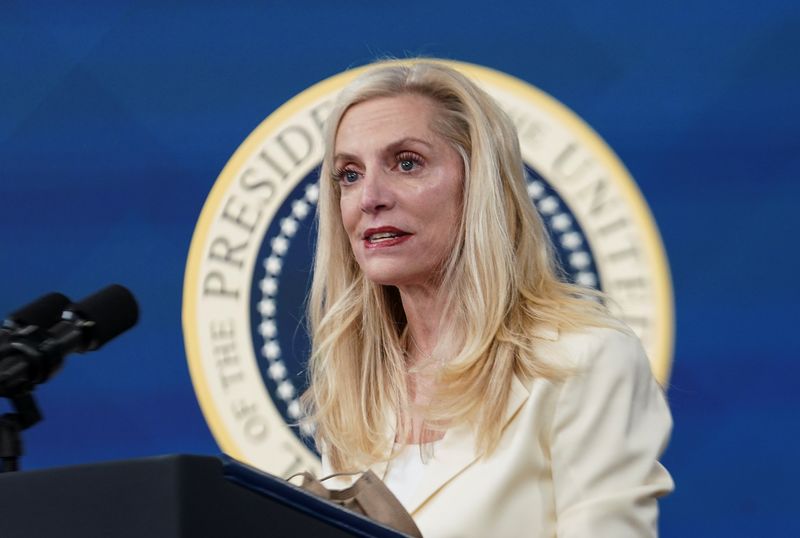 © Reuters. FILE PHOTO: U.S. Federal Reserve board member Lael Brainard speaks after she was nominated by U.S. President Joe Biden to serve as vice chair of the Federal Reserve, in the Eisenhower Executive Office Building’s South Court Auditorium at the White House

(Reuters) -The Federal Reserve will likely soon slow its interest rates hikes, Fed Vice Chair Lael Brainard signaled on Monday, as the U.S. central bank tries to figure out how high borrowing costs need to go and how long they should stay there to bring down inflation.

"I think it will probably be appropriate soon to move to a slower pace of increases, but I think what’s really important to emphasize is... we have additional work to do," Brainard said in an interview with Bloomberg in Washington.

"It's really going to be an exercise on watching the data carefully and trying to assess how much restraint there is and how much additional restraint is going to be necessary, and sustained for how long, and those are the kinds of judgments that lie ahead for us," she said.

The Fed raised its policy rate early this month to a range of 3.75%-4%, its fourth straight 75-basis-point interest-rate hike, as it seeks to rein in demand for goods, services, and labor so as to reduce inflation that's running more than three times the Fed's 2% target.

Fed Chair Jerome Powell has signaled that the central bank's next move may be smaller to give time to judge how the rapid rate hikes so far this year are affecting the economy.

But he also signaled the policy rate may next year peak at a rate higher than the 4.6% level that most policymakers had expected in September.

"It makes sense to move to a more deliberate and a more data dependent pace as we continue to make sure that there's restraint that will bring inflation down over time," she said.

Data released last week showing a slowdown in overall inflation and particularly in goods prices was "reassuring," Brainard said, though policymakers will need to see that develop into a trend. She said it will likely take until "well into next year" to see a recent decline in new lease rates filter into the broader data on housing-related inflation.

As rates get more restrictive, she said, the balance of risks will become more "two-sided," meaning that higher interest rates could start slowing the labor market enough to begin to endanger the Fed's second mandate, full employment.

Currently the U.S. unemployment rate is at 3.7%, below the 4% level that most policymakers believe reflects a long-run sustainable rate.