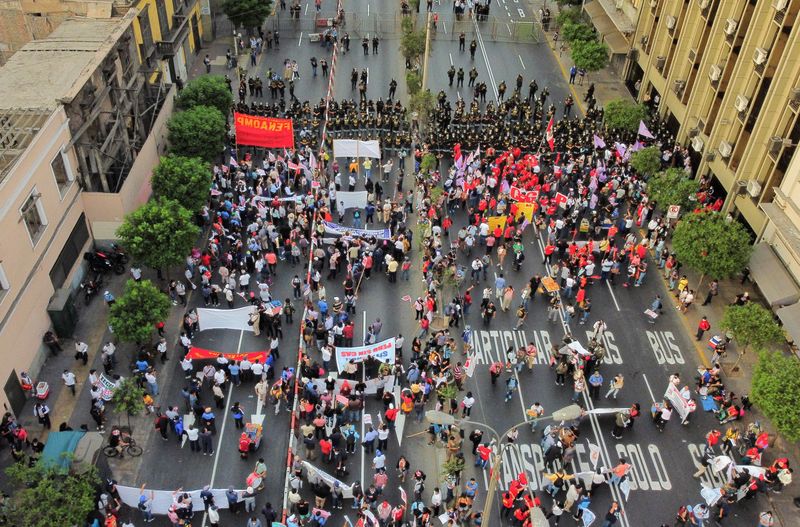 (Reuters) -The war in Ukraine and drought fuelled by climate change has sent global prices for grains, cooking oils, fuel and fertilizer soaring.

Rising prices for basic food staples is fuelling protests from Indonesia to Iran.

The trend is growing and is alarming policymakers, with United Nations agencies warning that the price hikes will worsen an existing food crisis in Africa and could cause "catastrophic" child malnutrition.

Following are protests in alphabetical order that have erupted over food prices over the past few months.

Thousands of farmers protested in Buenos Aires on April 23 against President Alberto Fernandez, whose policies to contain food prices to curb rampant inflation have been criticized by the agricultural sector.

Cypriot farmers dumped tonnes of milk and lit bales of hay outside the presidential palace in the capital Nicosia on May 18, in protest at high prices and production issues.

Thousands of Greek workers protested in Athens in May Day rallies against surge in energy and food prices. Greece's annual consumer inflation accelerated to 8.9% in March, hitting its highest level in 27 years.

One person was killed in Guinea's capital on June 2 during protests over fuel price hikes, in the most serious unrest since a military junta took power last year. Gunfire rang out in Conakry overnight as people barricaded streets and set tyres alight in protest over a 20% increase in the price of gasoline, a Reuters reporter and witnesses said.

Indonesian farmers protested in Jakarta on May 17 against rising cost of palm oil export ban. Smallholder farmers' group APKASINDO estimates at least 25% of palm oil mills have stopped buying palm fruit from independent farmers since the ban started, sending the price of palm fruit 70% below a floor price set by regional authorities.

Price protests turn political in Iran as rallies spread. The protests began in early May sparked by the government's subsidy cut decision that caused price hikes in Iran by as much as 300% for a variety of flour-based staples. The government also raised prices of some basic goods such as cooking oil and dairy products.

Pensioners protested in Iran on June 6 in a fresh demonstration against soaring living costs, according to Fars news agency and social media reports, in a further challenge to authorities grappling with weeks of unrest. About 1,000 retirees gathered to protest peacefully and were escorted by the police in the city, Fars wrote.

Activists held a demonstration on May 17 in Nairobi, asking the government to lower costs of living, especially on food prices.

Lebanese truck and bus drivers and others blocked roads in January to protest against soaring prices. The protesters accuse politicians of failure to address an ongoing economic crisis since 2019.

Palestinian police made a number of arrests on June 6 as protests against soaring prices for food and other necessities spread a day ahead of a planned strike to demand action from the cash-strapped Palestinian Authority. Official figures released by the Palestinian Central Statistics Bureau put the food prices increase at between 15 and 18 percent.

Peru deployed army on highways in April in response to road blockades spurred by anger over rising food and fuel prices. Peru is facing its highest inflation rate in a quarter century.

Sri Lankan President Gotabaya Rajapaksa declared a state of emergency in May, following a day of anti-government strikes and protests over a worsening economic crisis. Sri Lanka's economic crisis, unparalleled since its independence in 1948, has come from the confluence of the COVID-19 pandemic, rising oil prices and populist tax cuts by the Rajapaksas.

In March, a protester was shot and killed in the Sudanese city of Madani, medics said, as demonstrators marched across the country to protest a military coup that has been followed by a steep economic downturn. Sudan's currency has lost more than a third of its value since the military coup in October last year, rapidly driving up prices for fuel, food and other goods.

Tunisia said on May 11 it would raise the prices of some foods including milk, eggs and poultry, following protests by farmers against a jump in animal feed barley prices.