Factbox-How does the Xi and Putin 'no limits' partnership work? 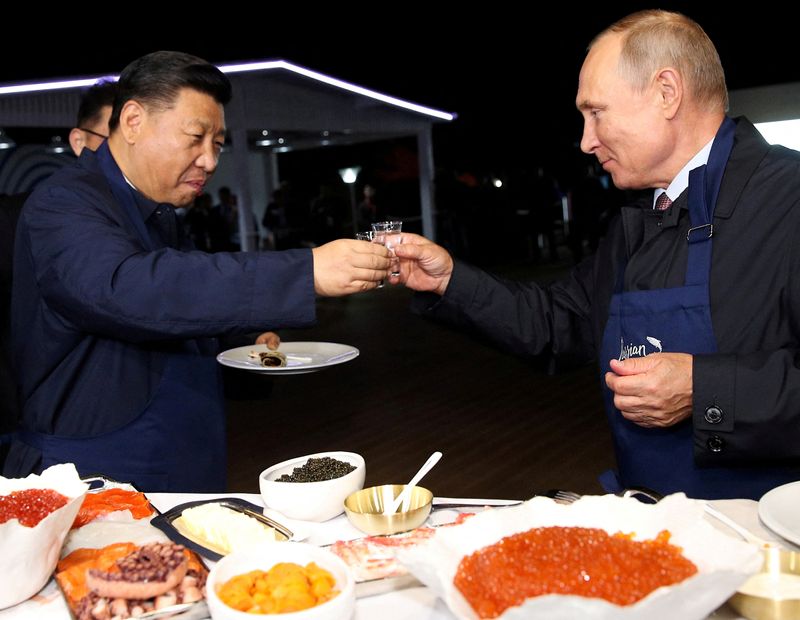 LONDON (Reuters) - The last time Xi Jinping met Vladimir Putin face to face just before the Ukraine war, the two 69-year-old leaders sealed a "no limits" partnership between China and Russia that triggered anxiety in the West.

Xi and Putin meet in the ancient Silk Road city of Samarkand in Uzbekistan on Thursday. The Kremlin said they will discuss Ukraine and Taiwan.

What is the partnership about and how have China and Russia got closer?

For Xi, the trip shows just how confident he is about his grip on power. It comes just a month before the 20th Communist Party Congress is due to cement his place as the most powerful Chinese leader since Mao Zedong.

It will allow Xi to present himself as the global leader of the anti-American world.

"Xi is sending a clear note that he is able to go and travel the world, to meet with, in quotation marks, 'world leaders' who are friends and they are friends to China in ways and under terms that basically the Chinese can lay down," said Professor Steve Tsang, director of the China Institute at SOAS University of London.

For Putin, China's big-power support amid the biggest confrontation with the West since the height of the Cold War allows him to cast Russia's isolation in the West as a tilt towards Asia.

There is a limit to the partnership though: China has been careful not to provide the sort of direct material support which could provoke Western sanctions against the People's Republic.

Putin casts the West as a failing group of declining U.S. puppets, though for much of the past 300 years Russia has looked to the West as the crucible of economic growth, technology, invasion and revolutionary ideas.

China has refrained from condemning Russia's military operation against Ukraine or calling it an "invasion". China's parliament chief told his Russian counterpart on Thursday that Russian action against Ukraine is a legitimate response to U.S. provocation.

Selling oil and gas to Europe has been one of the main sources for Russian foreign currency earnings since Soviet geologists found oil and gas in the swamps of Siberia in the decades after World War Two.

Now Putin is selling more to China, the world's largest energy consumer. China is Russia's largest buyer of oil. China imported 17% more Russian crude between April and July from the same period a year ago.

It has also bought over 50% more LNG and 6% more coal from Russia during the same period while electricity imports from Russia, mainly via a cross-broader transmission line connecting northeast China and Russia's Far East, soared by 39%.

China's oil, gas, coal and electricity purchases from Russia amount to $43.68 billion so far this year.

"Power of Siberia 1" is the only major Russian gas pipeline to China. It is expected to deliver 16 billion cubic metres in 2022, 11% of what Russia usually exports to Europe each year.

Putin will also hold a three-way Russian-Chinese summit with Mongolia - a potentially much shorter route for Russian energy from Western Siberia to China. Kremlin aide Yuri Ushakov said no new energy deals with China are expected to be signed in Uzbekistan.

Putin said last week that a major gas export route to China via Mongolia had been agreed.

Gazprom (MCX:GAZP) has for years been studying the possibility for a major new gas pipeline - the Power of Siberia 2 - to travel through Mongolia taking Russian gas to China from the Bovanenkovo and Kharasavey gas fields in Yamal.

It will carry 50 bcm of gas per year, around a third of what Russia usually sells Europe – or equivalent to almost all the Nord Stream 1 annual volumes.

According to the Kremlin, trade turnover between the countries reached $140 billion in 2021, while for the first seven months of this year it totalled almost $93 billion. Chinese statistics show a 30% rise in trade so far this year.

Russia's government is considering a proposal which says Moscow could buy $3-4 billion worth of Chinese yuan a month to help stem the rouble's rise, but that it does not make sense for the country to accumulate illiquid currencies longer-term.

Putin said last week that China will pay Gazprom for its gas in national currencies, based on a 50-50 split between the Russian rouble and Chinese yuan.

It also said it was gradually shifting to foreign trade settlements in Russian roubles and national currencies of "friendly" countries, while optimising its debt portfolio structure.