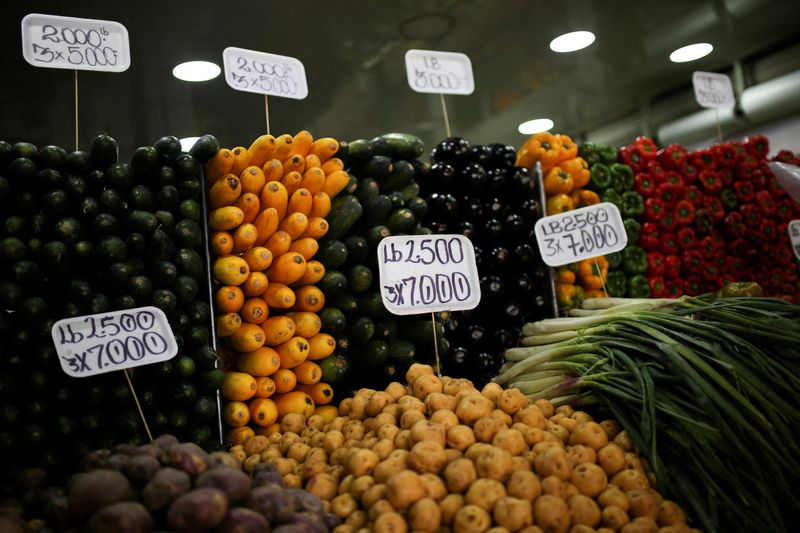 © Reuters. FILE PHOTO: Signs with prices of different fruits and vegetables are seen in the Paloquemao market square, amid inflation reaching the highest figures in years, in Bogota, Colombia October 7, 2022. REUTERS/Luisa Gonzalez/File Photo

PARIS (Reuters) - While households struggle to cope with rocketing prices, the inflation spike is good for the taxman because it means there are simply more revenues to tax. But that leaves governments with tough decisions about whether to return those gains or not.

Here are some of the ways that higher inflation affects the public finances.

As governments prepare their budgets for next year, many are adjusting personal income tax brackets so people avoid what tax experts call "bracket creep".

The phenomenon, sometimes referred to as "fiscal drag", occurs when pay increases to help workers cope with inflation push them into a higher tax bracket if there is no adjustment to take higher inflation into account.

With British Prime Minister Rishi Sunak's government due to present its much-awaited 2023 budget next Thursday, Britain could become a standout among developed economies if it maintains a freeze until 2026 on how much people can earn tax free and leaves the thresholds for tax brackets untouched.

To limit the pain of higher taxes on top of the surging cost of living, the governments of France, Germany and the United States have announced plans to adjust their tax brackets to reflect high inflation.

The sums at stake are nothing to scoff at. France's finance ministry expects higher tax brackets to cost the state over 6 billion euros next year and its German counterpart estimates it could be double that, which a panel of German economic advisers considers too generous. It is not yet known how much the UK government stands to gain if it decided to freeze tax brackets.

While higher wages can lead to a bigger tax take from personal income and payroll contributions, the most immediate boost to public coffers from higher inflation comes from value-added or sales tax, which rise in sync with prices of goods and services across an economy.

Such tax receipts, which can be a major source of revenue in some countries, is up over 16.8% so far this year in Germany and 11% in France, although part of the increase is due to weak spending in early 2021 on account of the pandemic.

But while higher inflation means that people spend more, it also means that government will over time also spend more as wages and procurement costs rise.

Since value-added tax rises immediately but government spending on things like wages can take time, the lag can in the short term be positive for the public finances.

However, many governments have bumped up spending and tax breaks to help households and businesses cope with the surging cost of inflation, which tends to annul the fiscal boost depending on how generous a government is.

Inflation is often seen as positive for government debt, because higher prices raises the nominal gross domestic product, reducing the value of a nation's debt burden in terms of GDP.

After many governments ramped up public spending during the pandemic to prop up their economies, economists frequently warn that they cannot simply count on inflating away their increased debt burdens.

In the short run, governments that have a portion of their debt issued as inflation-linked bonds see an immediate impact of higher payouts to investors when prices rise.