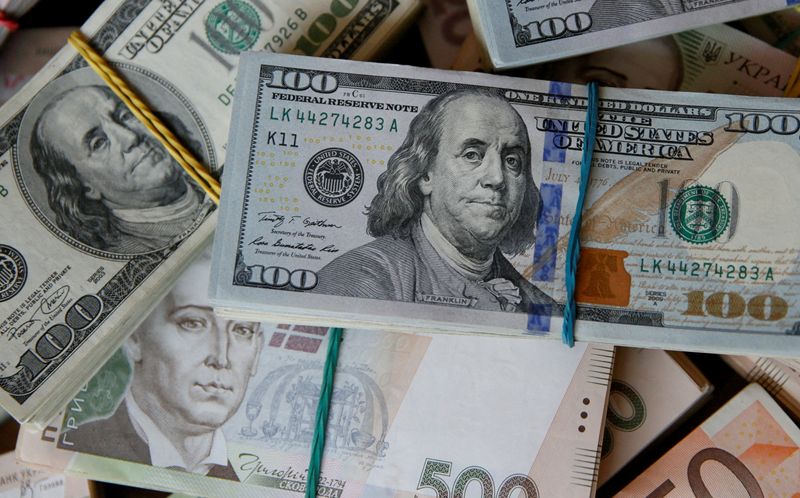 LONDON (Reuters) - Ukraine will push for unprecedented and bespoke International Monetary Fund and World Bank packages worth tens of billions of dollars in the coming weeks to shore up its war-ravaged finances, the country's top debt management chief told Reuters.

Ukraine's army has regained swathes of its territory from Russia in recent weeks but the financial and humanitarian costs of the nearly eight-month-old war continue to rise.

The International Monetary Fund looks ready to give it a boost by allowing countries struggling with global food price increases - a group that includes Ukraine - to draw more money from its main rapid financing facility.

Kyiv's goal though is a full-fledged IMF programme that would provide enough money and security to see it through the coming years.

IMF head Kristalina Georgieva said last week following a meeting with Ukraine's President Volodymyr Zelenskiy that the Fund would continue to back Ukraine, but the country wants things to happen faster.

"We have a really heated debate with IMF on what would be the preconditions for that," Yuriy Butsa, government commissioner for public debt management, said, explaining that the uncertainty over the war's duration and impact on the country's economy made it difficult to agree parameters with the Fund.

"I'm not sure whether standard tools of the IMF are really designed for this type of situation," he added. "They probably need to introduce a bit of creative thinking," noting the last time Europe saw a war of this magnitude the IMF was not set up.

"Create a bespoke facility or use the existing facilities in different ways. But being a bit less dogmatic in that sense would probably help."

Officials expect the next step to be the annual meetings of the IMF and World Bank in October and then an IMF staff mission to the country to try to work out what a potential $15-$20 billion new programme might look like.

Ukraine expects its economy will have shrunk by roughly a third this year. Next year's rebound might be as modest as 4%.

The shortfall between what taxes and other income sources bring in and what Kyiv is spending to keep the country and war running has dropped to around $3.5 billion a month from $5 billion Butsa estimates, but the numbers are still huge.

It has received just over $17 billion of Western aid and loans. Roughly another $10 billion is due from the European Union, United States and country's such as Britain.

But its biggest single financing source is its own central bank, which has already had to print over $10 billion worth Hryvnia.

"If we are not there in terms of financing, we will have to rely on the monetary financing like this year," Butsa said. "We will have a lot of problems after the war to sort out, we don't want to create another one like hyperinflation to fight."

Inflation is currently at around 23%.

GRAPHIC: Where Ukraine's money is coming from https://fingfx.thomsonreuters.com/gfx/mkt/lbpgnkejgvq/Pasted%20image%201663672789369.png

Post-war rebuilding costs are also piling up. They are estimated by the World Bank at over $350 billion already, but the government wants to $17 billion to be made available quickly to repair key infrastructure so millions that have fled the war can return.

Butsa said it is talking to the World Bank about a special facility for that money, where others, including private donors, could also contribute. The government is photographing the damage so donors could pick which projects their money goes to.

"We call it the rapid recovery for survival (fund)" Butsa said. "It's really very crucial for us to be quick with that one because, there are cities where it's not safe to live during the winter because there is no central heating."

Butsa successfully steered through a two-year sovereign debt payment freeze last month but the country's state-owned energy firm Naftogaz is now stuck in default after a large chunk of its bond holders rejected a similar plan.

Creditors were disgruntled as Naftogaz had been saying it would keep making its debt payments just weeks before it defaulted.

Analysts have suggested a deferral plan could be agreed if Kyiv offers to guarantee Naftogaz's debt going forward -- something it currently does not do -- but Butsa is reluctant.

"They (Naftogaz) are not looking at this option," he said. "From my point of view it will be really sub-optimal to increase the amount of guaranteed debt in the current environment."

Naftogaz needs its cash reserves to buy gas over the winter and beyond he said, although some analysts have estimated that the firm has ample supplies for now.

"After all the participants (bond holders) fully digest the fact that there won't be any payments on the principle of the bonds then it can become a more nuanced discussion on what can be the solutions," Butsa said.