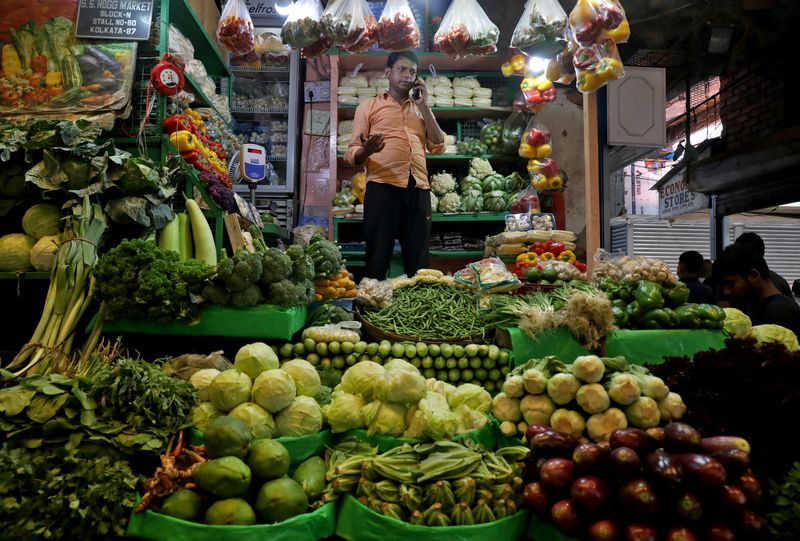 NEW DELHI (Reuters) - India's government is in no hurry to push inflation - now hovering near 7% and eight-year highs - back to the central bank's 4% medium-term target, for fear that aggressive rate hikes could hurt economic growth, two sources with direct knowledge of the matter said.

Surging prices are poised to trigger for the first time a legally mandated central bank report to the government on anti-inflation policy responses, but the sources said the government would be comfortable if the central bank took two years or even longer to get inflation down to 4%.

They added that, after rate rises of 140 basis points over the past four months by the Reserve Bank of India, to 5.4%, inflation was now getting under control and is expected to head back towards the top of its target band at 6%, which could be reached within three to six months.

"We are in no hurry to get inflation to 4%. Growth and inflation have to be balanced," said one of the sources, who asked not to be named because discussions on the matter are not public.

"New Delhi would be comfortable with inflation coming below 6% in the next three to six months," the source added. "Our inflation is under control especially after a series of measures from the government and the RBI."

India's finance ministry did not immediately reply to an email and an instant message seeking comment.

Many other big central banks also worried about inflation have been raising rates aggressively, with the U.S. Fed widely expected to raise rates by at least 75 basis points on Wednesday.

The RBI's inflation-targeting Monetary Policy Committee (MPC), established in 2016, is mandated to keep inflation within a band extending 2 percentage points either side of its 4% target.

If inflation remains below or above the band for three straight quarters, the RBI has to report to the government why it failed to reach the target, what remedial actions it will take, and an estimated time period for achieving the target.

Inflation data for September, due on Oct. 12, is nearly certain to keep India's consumer price growth above 6% for a third quarter in a row, triggering the reporting requirement.

For four years the RBI's monetary policy maintained an accommodative stance with a growth bias, but it changed course in May, just before the release of April's "shocker" retail inflation reading of 7.79%, which was the highest in eight years, driven by a surge in food prices.

Inflation has remained high since, putting pressure on the central bank to raise interest rates again when the Monetary Policy Committee is next due to meet on Sep. 30.

The government has taken a number of other measures to battle inflation, imposing curbs on rice exports last week after previously restricting exports of wheat and sugar, to cool local prices, while reducing taxes on gasoline and diesel in May.

With economic growth flagging, however, authorities have become worried about steps that would undermine domestic demand.

India's April-June economic growth of 13.5% was lower than the RBI's forecast of 16.2% for the period, threatening the overall growth projection of 7.5% for the full year.

Fitch said it expects India's monetary policy rates to peak in the near future and remain at 6% through next year.

The second source familiar with the matter said India's economic growth momentum is in the right direction and steps already taken by the central bank and the government should be able to contain inflation.

India's central bank has said its rate decisions would be calibrated, measured and nimble depending on economic dynamics, while markets expect that it might raise rates by 35 to 50 basis points later this month.