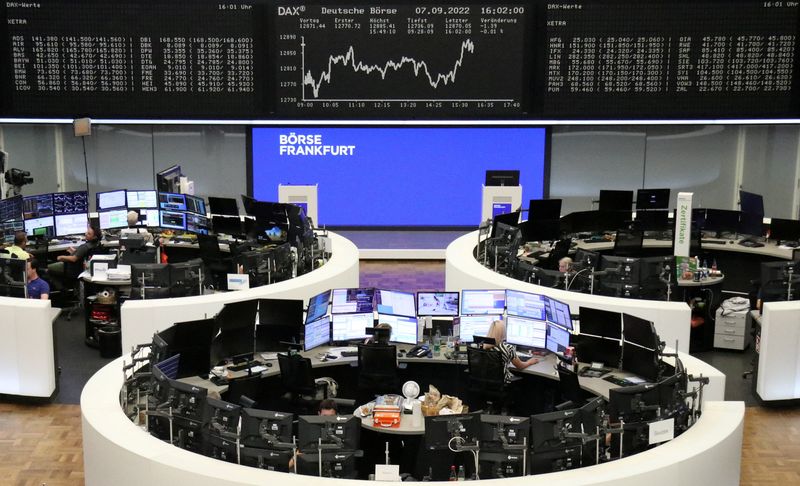 By Shreyashi Sanyal and Sruthi Shankar

The pan-European STOXX 600 index rose 1.5% to close at over one-week highs.

European stocks briefly shed gains in afternoon trading following reports that ECB policymakers are likely to kick off a debate next month about whittling down the 4-trillion-euro bond pile.

That comes a day after the central bank raised its key rates by an unprecedented 75 basis points (bps) and promised further hikes. Several money houses are forecasting another 75 bps rate hike in October.

Euro zone banks, rocked by worries over their profitability in a low interest rate environment, jumped 3.2% to mark their biggest percentage gains in almost two months. The index is still down 16.3% year-to-date.

"Traders are in risk-on mood even though yesterday there was a rate hike from the ECB and hawkish commentary from (Fed Chair) Jerome Powell," said David Madden, market analyst at Equiti Capital.

"It is possible that dealers are getting used to the idea of interest rates being increased, and elevated bond yields."

Investors are focussed on a meeting of European Union countries' energy ministers later in the day, where they will figure out solutions from a long list of possible measures to shield citizens from sky-high energy prices as winter approaches.

While the STOXX 600 managed to end the week 1.1% higher, investors doubt whether the rally can be sustained as Russia turns off its gas taps to Europe indefinitely amid a brewing cost-of-living crisis in the region.

"We remain negative on European equities given a backdrop of heightened geopolitical/energy uncertainty at the same time as central banks are tightening policy into an economic slowdown," Morgan Stanley (NYSE:MS) analysts said in a note.

Telecom Italia (BIT:TLIT) (TIM) shares rose 2.8% as sources close to the matter said it is close to kicking off a process to sell a minority stake in its enterprise service arm.