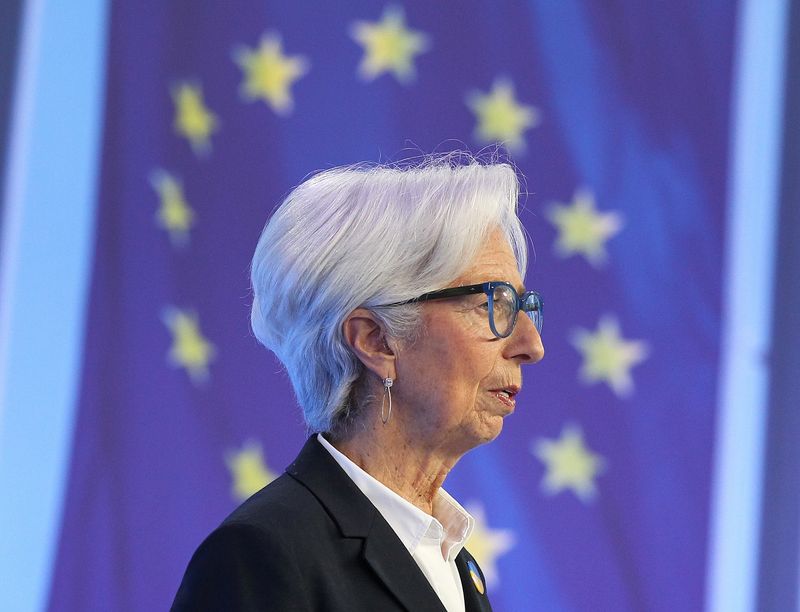 LUXEMBOURG (Reuters) - Euro zone finance ministers urged a return to budget discipline on Thursday to help the European Central Bank fight the risks of a new debt crisis in the bloc amid high inflation, falling growth and market tensions.

At a regular meeting in Luxembourg, ECB head Christine Lagarde briefed the ministers about the bank's announcement on a so-called anti-fragmentation tool that would offer fresh support to the bloc's more indebted nations. Fragmentation is the term used in the bloc to refer to risks from high spreads between member states' government borrowing costs.

"All member states need to return to sound public finances, we need to reduce our deficits and we need a reliable path towards debt reduction," Germany's Finance Minister Christian Lindner told reporters before the meeting.

But Lindner played down fragmentation risks caused by high spreads between German treasuries and bonds issued by more indebted nations, like Italy.

"We are witnessing some rising spreads but there is no need for any concern," he said.

His Austrian counterpart Magnus Brunner had the opposite message: "We are very much concerned" about spreads and fragmentation risks, he told reporters.

However, he had a similar solution to address the problem as that suggested by Lindner.

"Bring your budgets in order," he urged countries, noting that would allow the ECB to fight fragmentation risks more effectively.

In what could be seen as a veiled criticism of ECB measures to support more indebted nations, he said: "The rules have to be for all member states. No different rules for different member states."

At the meeting, Lagarde largely repeated the content of the ECB's earlier announcement on efforts to calm markets, an official familiar with the discussions told Reuters, without elaborating on details.

Dutch Finance Minister Sigrid Kaag told reporters the ECB sent "an important signal" by calling an extraordinary meeting on Wednesday when it announced the plans for an anti-fragmentation tool.

She said "these are not easy times," adding that fiscal stability and the fight against inflation were of crucial importance.

Her Spanish counterpart Nadia Calvino welcomed the ECB announcement, which she called an "effective" move, and said that both the ECB and euro zone governments were committed to ensuring the strength and resilience of the euro zone.