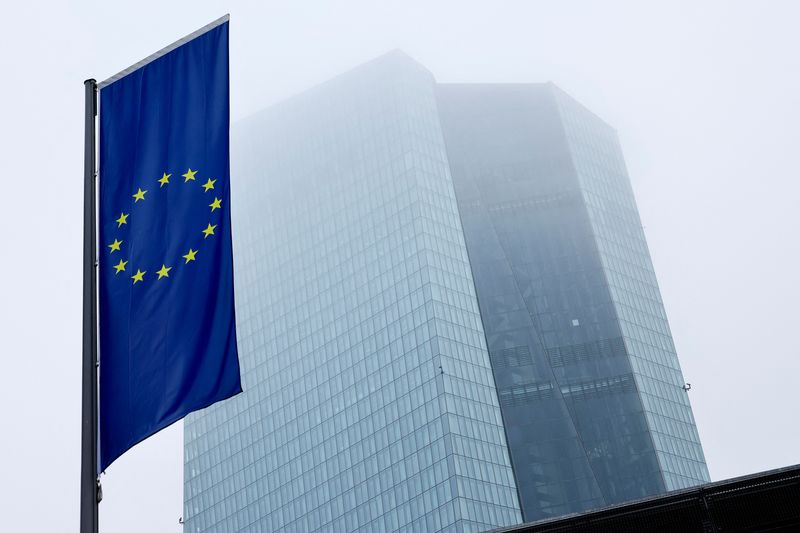 © Reuters. FILE PHOTO: The building of the European Central Bank (ECB) is seen amid a fog before the monthly news conference following the ECB's monetary policy meeting in Frankfurt, Germany December 15, 2022. REUTERS/Wolfgang Rattay

Consumer price growth in the bloc that expanded to 20 nations when Croatia joined on Jan. 1, slowed to 9.2% in December from 10.1% a month earlier, below forecast for 9.7% in a Reuters poll, data from Eurostat showed on Friday.

But this seemingly good news masked a more malignant trend as the biggest chunk of the decline came from lower energy prices while all key components of core inflation accelerated.

Inflation excluding volatile food and energy prices picked up to 6.9% from 6.6% while an even narrower measure that also excludes alcohol and tobacco prices rose to 5.2% from 5%.

Services and non-energy industrial goods inflation, both watched closely by the ECB to gauge the durability of price growth, accelerated, adding to concerns that price growth is more stubborn than feared.

Another worry is that headline inflation may have dipped on a host of one-off or temporary measures, including government subsidies, and some of this could be reversed in January, when inflation could accelerate once again.

But even if price volatility is set to be high over the coming months, inflation has likely peaked and the real issue is just how quickly it will fall back towards the ECB's 2% target.

The problem is that the longer price growth stays high, the more difficult it will be to tame it as firms start adapting their pricing and wage policies, perpetuating inflation.

That is why the ECB raised rates by a combined 2.5 percentage points last year - mirroring its global peers, even if somewhat later - and promised big hikes in both February and March in what is already the most aggressive policy tightening cycle in its history.

But even so, inflation will not return to 2% until the second half of 2025, according to the ECB's own projections, which have proven excessively optimistic over the past two years, suggesting that risks are skewed towards a slower disinflationary process.

Markets and surveys are both starting to factor in the possibility that inflation stays above 2% further out, partly because a host of outside factors are compounding the ECB's problems.

A winter recession that was expected to push up unemployment was supposed to eat deep into price pressures. But the downturn is proving more benign than forecast and employment, already at a record high, is actually going up, not down.

Fiscal support for households is also proving more generous than hoped and this excessive spending is adding to purchasing power, countering the ECB's restrictive policies.