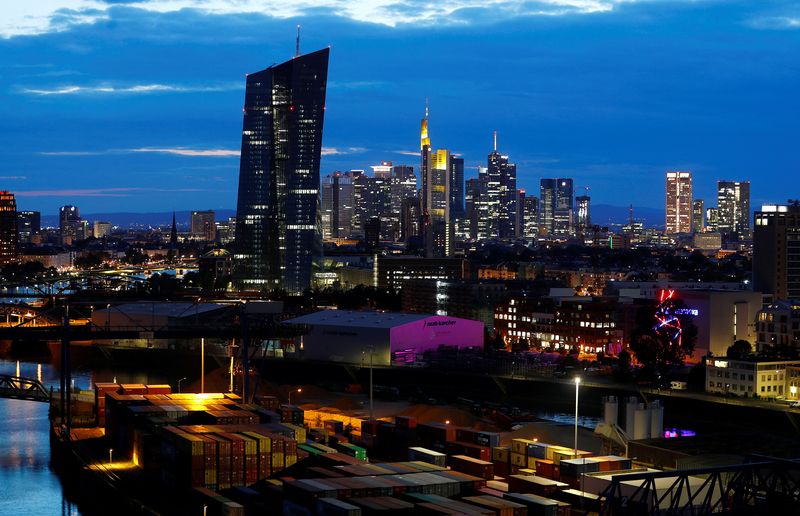 © Reuters. FILE PHOTO: The skyline with its banking district and the European Central Bank (ECB) is photographed in Frankfurt, Germany, August 13, 2019. REUTERS/Kai Pfaffenbach

BRUSSELS (Reuters) - Euro zone companies survived the two years of the COVID-19 pandemic better than expected with fewer insolvencies than feared, euro zone finance ministers are likely to conclude on Monday according to a senior euro zone official.

The official, who asked not to be named, said the better outcome was testament to the effectiveness of the 2.3 trillion euros ($2.64 trillion) of national liquidity support measures taken to keep companies from collapsing under repeated government-imposed pandemic lockdowns and the resilience of the economy.

"There was concern about a wave of insolvencies," said the official, involved in the preparation of the monthly meeting of euro zone finance ministers.

Among the measures to stave off bankruptcies, governments introduced subsidised part-time work schemes to prevent mass lay-offs and guaranteed loans taken by companies from banks.

"At this point ... corporate insolvencies remain surprisingly low compared to the severity of the crisis and the historical average," the official said.

But he warned that policymakers in the 19 countries sharing the euro had to keep supporting viable companies because many ended the pandemic with higher debt and because with new waves of infections every few months it was not clear how much longer they might need emergency support.

"The situation differs between countries and sectors," the official said.