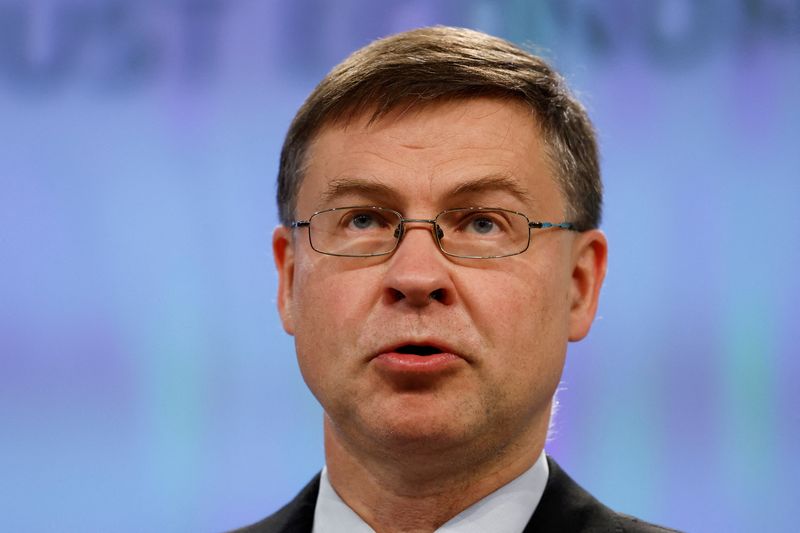 By Jan Strupczewski and Jason Hovet

At a news conference after EU finance ministers held talks in Prague, Dombrovskis said the main goal of the rules, designed to safeguard the value of the euro, would remain making sure public debt was sustainable.

"This will require fiscal adjustment, reforms as well as investments," Dombrovskis said, signalling government investment was likely get some more attention in the course of the reform.

"Those three elements should all be combined so as to achieve a realistic, gradual and sustained reduction in public debt ratios," he said.

EU rules say public debt must be below 60% of gross domestic product (GDP) and government deficits below 3% of GDP.

"Given divergent debt levels across Member States, there cannot be a one-size-fits-all approach," Dombrovskis said. "There can be more leeway for Member States, but within a common set of rules," he said.

This would be a departure from the current rule that all countries have to cut their debt every year by one twentieth of the excess above 60% of GDP - a requirement that is far too ambitious for the high debt countries.

"Rules have to be clear, and they have to be enforceable, that means they have to be realistic," Czech Finance Minister Zbynek Stanjura, who hosted the meeting, said. "So whatever changes we make, we have to work out what is realistic."

In a nod towards Germany and some northern EU countries, the Commission will propose stronger enforcement of the rules in cases of non-compliance, Dombrovskis said, as past practice showed adhering to the rules was not a priority for some.

The Commission will also propose simplifying the rules by focusing on a single observable indicator, such as the expenditure benchmark, Dombrovskis said.

The expenditure benchmark is a rule that allows governments to increase spending each year by the rate of the economy's potential growth - the rate at which an economy grows without generating excess inflation.