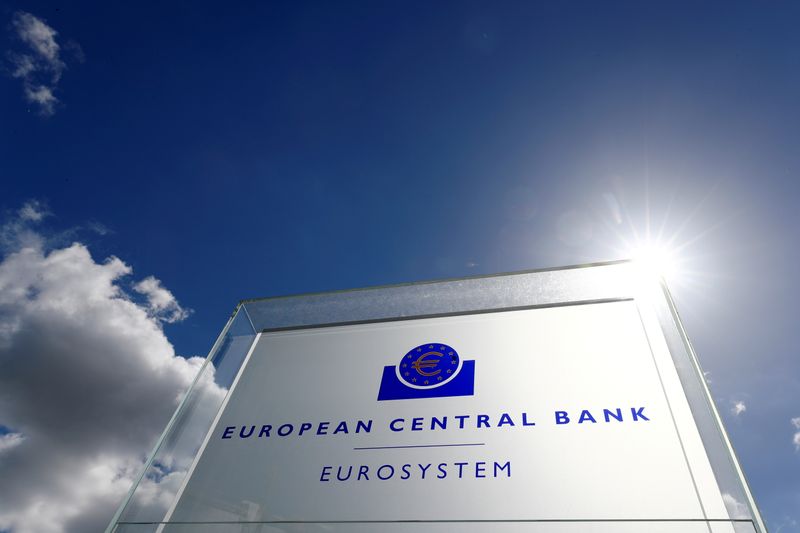 © Reuters. FILE PHOTO: The logo of the European Central Bank (ECB) is pictured outside its headquarters in Frankfurt, Germany, April 26, 2018. REUTERS/Kai Pfaffenbach

FRANKFURT (Reuters) - European Central Bank policymakers are set for a showdown next week as they chart a new policy path amid growing fears of a third wave of coronavirus infections.

The guidance update is made necessary by the ECB's new strategy, which says the central bank should let inflation across the 19 countries that use the euro currency edge above 2% when interest rates are near rock-bottom - as they are now.

That change in strategy, announced last week, was unanimously adopted, but putting it into practice is proving trickier.

This is because rate-setters on the ECB's Governing Council disagree on the economic outlook and thus on how much more stimulus, mainly in the form of bond purchases, is needed.

The ECB's current guidance is that it will buy bonds for as long as it deems necessary and keep interest rates at their current, record low until it is happy that inflation is converging to its target.

Governors from indebted countries such as Portugal's Mario Centeno and Italy's Ignazio Visco have come out in force to argue that the new strategy means the ECB should keep the money taps wide open for even longer.

"The strategy admits a temporary and moderate inflation values above 2%," Centeno told Reuters this week. "We must be patient and tolerant with deviations that we would not tolerate previously."

Visco too said that any premature tightening should be avoided. He cited the risk of a third wave of COVID-19, which has already seen curbs reinstated in some euro zone countries, and the need to stop rising U.S. bond yields from dragging borrowing costs within the bloc higher.

ECB President Christine Lagarde has not given any specific indication to how the guidance could change although her emphasis on "the persistence that we need to demonstrate" suggests she might weigh in on the doves' side.

But hawks, who favour tighter policy and tend to come from countries with lower debt-to-GDP ratios, will not go down without a fight at the July 22 meeting.

German ECB board member Isabel Schnabel said inflation could converge to the ECB's target "maybe sooner than some people expect at the moment".

And fellow German Jens Weidmann, president of the national Bundesbank, said the ECB should not seek to make up for lost ground in the past decade, when inflation was below its target for most of the time.

Ultimately, the devil might be in the detail of the policy message, which is crucial for investors but often fails to cut through to the general public.

Portugal's Centeno said this week he would back decoupling the guidance on the future path of interest rates from that on bond purchases, which would signal to traders that the ECB will keep a lid on long-term bond yields.

The ECB currently says it expects to stop adding to its Asset Purchase Programme "shortly before it starts raising the key ECB interest rates".

The central bank is also running a separate, 1.85 trillion euro Pandemic Emergency Purchase Programme (PEPP), which is set to run at least until March 2022. Lagarde has indicated she is in no rush to wind down.

"We need to be very flexible and not start creating the anticipation that the exit is in the next few weeks, months," Lagarde said last week.