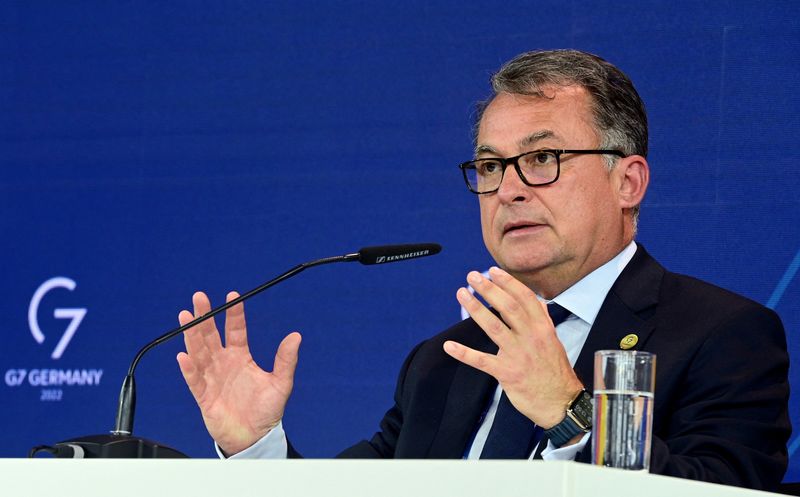 FRANKFURT (Reuters) - The European Central Bank must continue to raise interest rates decisively and should start letting its oversized holding of government debt expire from the start of 2023, Bundesbank President Joachim Nagel said on Friday.

The ECB has already raised rates by 200 basis points in three steps this year and put a string of further moves on the table as inflation is now running well into double digits with little hope of a return to its 2% target for years.

"We must resolutely raise our key rates further and adopt a restrictive stance," Nagel, a powerful conservative, or policy hawk, said in a speech. "We cannot stop here. Further decisive steps are necessary."

At 1.5%, the ECB's deposit rate is at the lower end of the commonly accepted, 1.5% to 2% range for the "neutral rate," where it is neither stimulating nor restricting growth.

Markets see a move to 2% in December, then a further rises towards 3% by next spring.

Complementing rate hikes, the ECB needs to start running down the trillion of euros worth of government debt it hoovered up over the past decade, when inflation was still too low.

"We should start reducing the size of our bond holdings at the beginning of next year by no longer fully reinvesting all maturing bonds," Nagel said.

The ECB holds around 5 trillion euros worth of bonds and said it would start talks in December on how and when to run down the 3.3 trillion euros in its Asset Purchase Programme.

Speaking earlier on Friday, ECB chief Christine Lagarde said this run off should be "measured and predictable", a comment suggesting that the decision is about the terms of the wind down and not whether it was necessary.