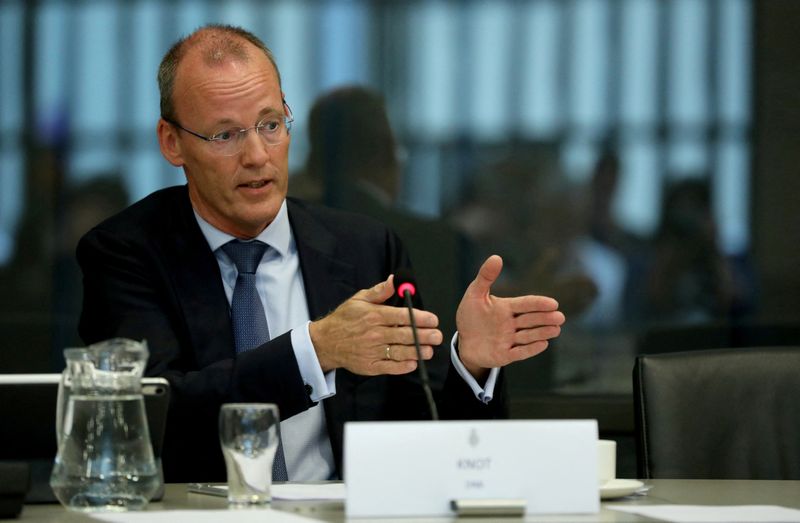 FRANKFURT (Reuters) - The European Central Bank may slow the pace of interest rate hikes but should soon start running down its massive government debt holdings as that would ease the need for further rate rises, Dutch Central Bank President Klaas Knot said on Friday.

The ECB has raised rates by an unprecedented 200 basis points since July, but a slowdown in the rate of increases has been anticipated after the bank claimed "substantial progress" in policy tightening on the back of 75 basis point moves in September and October.

"As the stance of monetary policy tightens further, it will become more likely that the pace of increases will slow," Knot, an influential conservative or policy hawk, said in a speech. "I expect us to reach broadly neutral territory at next month’s policy meeting."

At 1.5%, the ECB's deposit rate is already approaching the generally accepted 1.5% to 2% range for the neutral rate, which neither stimulates nor slows economic growth.

Once that level is reached, the ECB should then move into "restrictive" territory to dampen demand, but should also start running down its 3.3 trillion euro ($3.4 trillion) Asset Purchase Programme, Knot said.

"It would not be consistent to keep a large balance sheet to compress the term premium, while at the same time tightening policy rates above neutral," Knot said in Frankfurt.

The comments may point to an early 2023 start for the debt run-off as the ECB's February meeting, its first next year, could already look to raise rates above neutral.

While no date has been set for letting debt expire, Bundesbank chief Joachim Nagel, another influential hawk, has made the case for a start at the beginning of next year.

"An earlier start of so-called Quantitative Tightening (QT) lowers both peak inflation and the required terminal rate via its effect on the term premium and the terms of trade," Knot said.

Markets now see the terminal, or peak, ECB rate at just below 3%, suggesting another 150 basis points of hikes may come between now and mid-2023.

Like ECB chief Christine Lagarde, Knot argued that rates should remain the bank's primary tool and the balance sheet run-off should happen on the “backburner”.

"This calls for an early but partial stop to reinvestments, to test the waters before calibrating the ultimate pace of the roll-off," Knot said. "QT should be predictable, like watching paint dry."