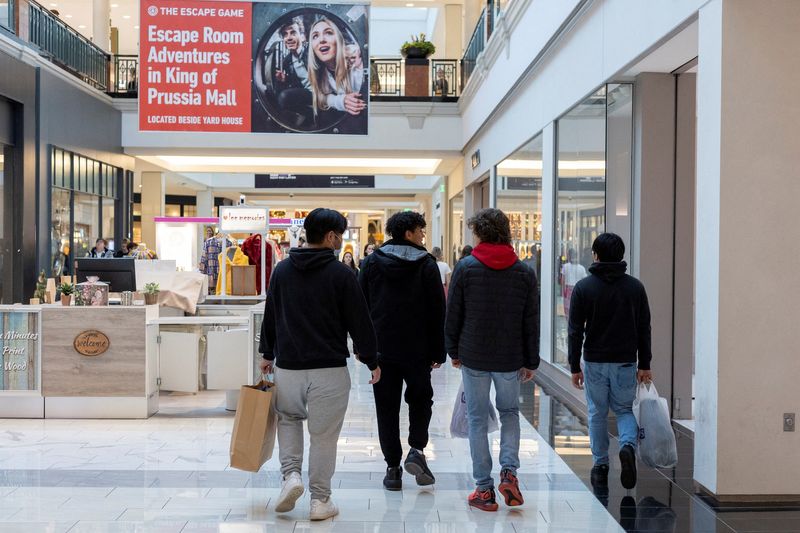 LONDON (Reuters) - U.S. consumer prices are rising at the fastest rate for decades, a sign that aggregate demand for goods and services from households and businesses is overwhelming the economy’s productive capacity.

Prices for all goods and services increased at a compound rate of 4.2% per year over the two years ending in December 2021, the fastest two-year increase since 1991 (https://tmsnrt.rs/3qnnbYl).

At this rate, the price level will double and nominal wages will halve every 17 years, fast enough to ensure that inflation has become much more noticeable for households and businesses and has risen up the political agenda.

Contrary to the earlier views of policymakers at the White House and the Federal Reserve, the increase in prices has been neither transitory nor confined to volatile items such as gasoline.

Core prices for all items other than food and energy increased at a compound annual rate of 3.5% in the two years to December, the fastest since 1993 (“Consumer price index”, U.S. Bureau of Labor Statistics, Jan. 12).

And in the most recent three months, ending in December, core prices were advancing at an annualised rate of almost 7%, implying inflationary pressure was intensifying rather than easing.

Price rises were faster for goods (15.8%) even when food and energy are excluded (13.7%) but services prices were also rising much more rapidly (5.0%) than the Fed’s long-term average target of just over 2.0% per year.

In the last three months, largely in response to the surge in prices, policymakers have pivoted abruptly from a rhetorical focus on sustaining the recovery and increasing employment to controlling inflationary pressures.

“The economy has rapidly gained strength despite the ongoing pandemic, giving rise to persistent supply and demand imbalances and bottlenecks, and thus to elevated inflation,” Fed Chairman Jerome Powell said this week.

“We know that high inflation exacts a toll, particularly for those less able to meet the higher costs of essentials like food, housing, and transportation,” the Fed chief told senators at his confirmation on Tuesday.

“We will use our tools to support the economy and a strong labor market and to prevent higher inflation from becoming entrenched.”

Until now, the White House and the Fed have tended to blame price rises on specific bottlenecks linked to economic re-opening (a micro-economic problem) rather than too much aggregate demand (a macro-economic one).

They have pointed to evidence that there is still significant spare capacity in the labour market, with far fewer people in employment than before the pandemic erupted in early 2020.

In December, there were still only 149 million non-farm jobs in the economy, compared with 157 million that would have been expected if employment had continued growing along its pre-pandemic trend.

The civilian labour force participation rate for those aged 25 years and over was still only 62.8% in December compared with 64.5% in the same month in 2019.

Both the White House and the Fed have pointed to this jobs gap to argue the economy is still operating below its potential and needs short-term stimulus to achieve full employment.

But potential output is determined by the availability of capital, energy, raw materials and production capacity as much as labour.

On many of these other measures, the economy is already close to its pre-pandemic trajectory, implying there is little or no spare capacity.

Real gross domestic product is just 2.5% below its pre-pandemic five-year trend. Real personal consumption expenditures are only 0.8% below trend.

Total energy consumption was still 1.1% below track in the three months to September, but manufacturing production was already 2.9% above its anaemic pre-pandemic trajectory by November.

In practice, the pandemic and recession are likely to have disrupted some productivity growth and destroyed some capacity semi-permanently, so spare capacity may be even less than these figures suggest.

If the economy is like a complex system or a machine, the rate-limiting factor or source of friction in this case is not the availability of labour but tightness in production capacity, energy and other raw materials.

In the first nine months of 2021, the White House and Federal Reserve’s exclusive focus on the labour market blinded them to the increase in frictional pressures in other parts of the system.

In April, White House advisers gave a lengthy press briefing in which they argued the economy could be run “hot” without “overheating”, but this has proved impossible.

There is not enough manufacturing capacity, freight transportation capacity, oil, gas and other raw materials to sustain the rapid rate of demand growth being fuelled by expansionary monetary and fiscal policies.

The resulting excess demand is showing up as rapid price increases across a broadening range of final products (furniture), semi-finished products (semiconductors) and raw materials (cotton).

Now policymakers have a macroeconomic problem (too much demand) they are attempting to solve with microeconomic interventions (antitrust enforcement and targeted measures to support supply chains).

Prices will continue to escalate until aggregate demand is brought back into line with aggregate supply, either through slower demand growth, faster supply growth, or some combination of the two.

In practice, there may be some scope to increase supply growth, but it is likely to be limited in the short term, which means most of the adjustment will have to come from slower growth in demand.

The challenge for policymakers is to achieve a slowdown in demand growth, and inflation, without tipping the economy into a recession.

John Kemp is a Reuters market analyst. The views expressed are his own