Coal, Lumber and Food Under Threat by Potential US Rail Strike 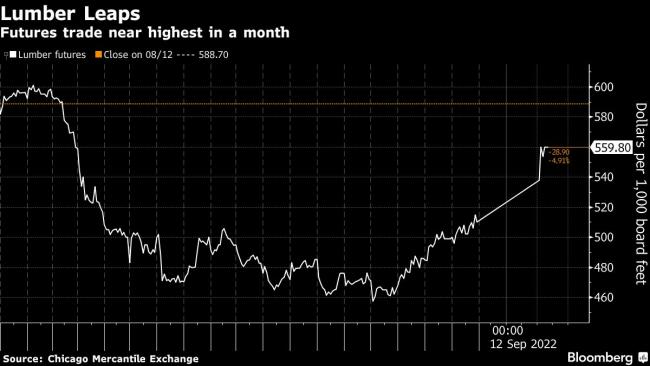 (Bloomberg) -- Commodities groups are sounding the alarm as a potential railway strike threatens to cripple transportation of vital goods from food and lumber to coal.

Freight railroads and labor unions worked through the weekend to try to avoid a strike that could cost the US economy more than $2 billion a day, though there isn’t much sign of progress ahead of a Sept. 17 walkout. A strike would threaten shipments of produce, grains, energy and fertilizer when food inflation has soared.

The potential disruption comes as the world increasingly turns to the US for food supplies, with Russia’s war in Ukraine roiling commodity markets and disrupting crucial grain shipments from the Black Sea, one of the world’s breadbaskets. Global food prices have touched records in recent months as inflation ripples through economies and hunger levels rise. It would also have a significant impact on the US coal industry since the vast majority of the fuel is transported by train.

“Coal would stop,” said Ernie Thrasher, CEO of Xcoal Energy & Resources LLC, the biggest US exporter. “No coal is going to move until these guys go back to work.”

Lumber prices already reacting to the potential labor threat, soaring to levels not seen in a month due to shipment concerns. Futures contracts rose 9.6% on Monday in Chicago to reach the exchange limit of $559.80 per 1,000 board feet, the highest price since Aug. 18.

“A potential rail strike would be an issue” since most of lumber is produced in Western Canada and travels to market via rail, Mark Wilde, an analyst at BMO Capital Markets, said in an email.

“Rail networks are complicated, and carriers must make preparations ahead of a potential stoppage to keep certain types of cargo safe and secure,” Fertilizer Institute’s Chief Executive Officer Corey Rosenbusch said in a Saturday statement. “Fertilizer falls into that category and is being taken off the rails. That is bad news for farmers and food security.”

Any labor action comes during a pivotal time for the global food supply chain since American farmers are harvesting crops, including a record soybean bounty.

“The potential of service slowdowns or stoppages ahead of the harvest season is incredibly concerning,” American Soybean Association spokeswoman Wendy Brannen said.

Coal-fired power plants would continue to operate, drawing from on-site inventory, but utilities’ reserves fell to a 24-year low a year ago and haven’t increased much since then. Miners would likely continue to dig up the fuel, as long as they have space at their facilities to let it pile up.