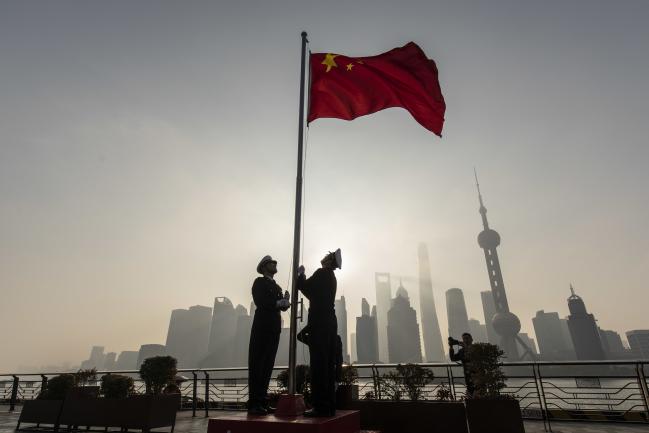 © Bloomberg. China Customs officers raise a Chinese flag during a rehearsal for a flag-raising ceremony along the Bund past buildings in the Lujiazui Financial District at sunrise in Shanghai, China, on Tuesday, Jan. 4, 2022. A wall of maturing debt and a surge in seasonal demand for cash will test China’s financial markets this month, putting pressure on the central bank to ensure sufficient liquidity. Photographer: Qilai Shen/Bloomberg

(Bloomberg) -- Ensuring that China’s economy remains stable before a twice-a-decade meeting of the ruling Communist Party is “crucial,” a top policymaker says, a sign of the outsize role the event will play in the nation this year.

Officials should roll out policies to support that goal, he wrote, while being cautious with those that would cause contraction. Han also urged that fiscal spending be accelerated, with work on infrastructure be “appropriately front-loaded.”

Investors have been selling off China’s benchmark government bonds since the article by Han came out on expectations that the spending will boost the economy and with it inflation. The yield on notes due in a decade has risen 3 basis points over the past two sessions to 2.82%, the highest in more than a week.

Leaders in China’s one-party system are keen to ensure that nothing goes wrong before the congress, which is usually held in the autumn. President Xi Jinping is expected to use the event to secure a ground-breaking third term in office after already maneuvering to place himself in the same class as Mao Zedong and Deng Xiaoping, men who ruled the Asian nation until they died.

Xi last week told the 25-member Politburo that its “prime political task” now is to prepare for the congress, according to the official Xinhua News Agency.

Days later Foreign Minister Wang Yi told the nation’s diplomats that the “main theme” of their work this year would be ensuring a stable external environment and defusing any risks.

Li Zhanshu, chairman of the legislature’s Standing Committee, described the upcoming congress as “hugely and profoundly significant” and said lawmakers should show results before the event, Xinhua reported.