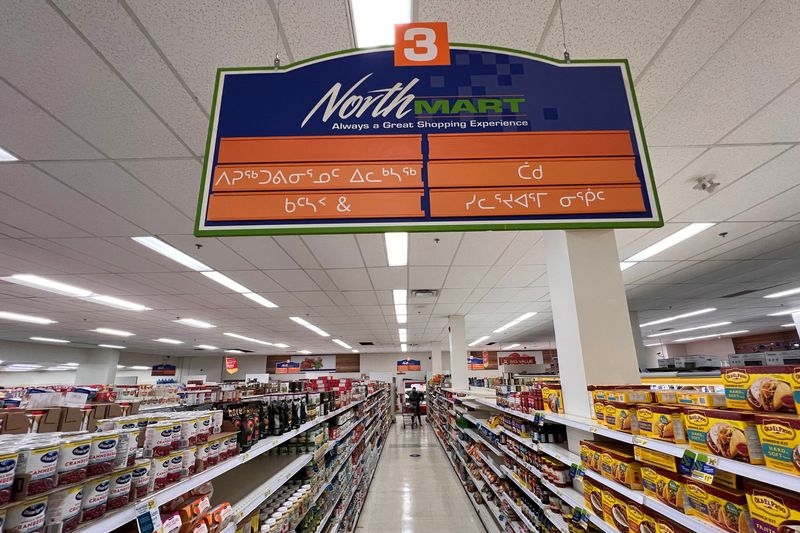 © Reuters. FILE PHOTO: A view of one of the aisles at the North Mart grocery store in Iqaluit, Nunavut, Canada July 28, 2022. REUTERS/Carlos Osorio

Analysts polled by Reuters had expected the annual rate to fall to 7.3% in August from 7.6% in July.

"Canadian inflation decelerated further in August, and unlike the prior month the move wasn't just a story of lower gasoline prices."

"It probably suggests to the Bank of Canada that hikes are starting to work but they are by no means done. It has maybe taken down some of the risk of a supersized rate hike in Canada in October but clearly there is still more wood to chop and we think that central banks, including the Bank of Canada, are still going to be pretty singularly focused on the inflation fight and getting inflation under control and down to closer to their target."

"A downside surprise is better than an upside surprise where the Bank of Canada's concerned. If you look at where the core CPI metrics are, they look like they are slightly lower on average than they were previous month. So again, that's a positive thing for the Bank of Canada. But the big picture here is still that we're talking about a CPI that is growing at 7% year-over-year. It's still a highly inflationary environment, from the Bank of Canada's perspective. So it still is going to require additional rate hikes, I don't know that this is going to change their (Bank of Canada's) thinking in the very near term. Though it does speak to the fact that inflation is decelerating, we have seen a peak in inflation, and they could probably afford to be a little bit more careful if they were so inclined."

"I think ultimately the really important thing will be the evolution of inflation expectations, which we will have more information on when we get the Business Outlook Survey and Canadian survey of consumer expectations in October."

"TD's forecast for interest rate increases this year is "another 50 (basis points) this year, and then we have one more in January to get them 4%. But my view here is that now we're in restrictive territory, the safest course of action is to slow down. I think they've front loaded enough and can revert back to the normal 25 basis point course of tightening. Having said all that, if the market demands a 50 basis point move, I don't think the Bank of Canada can disappoint the market."