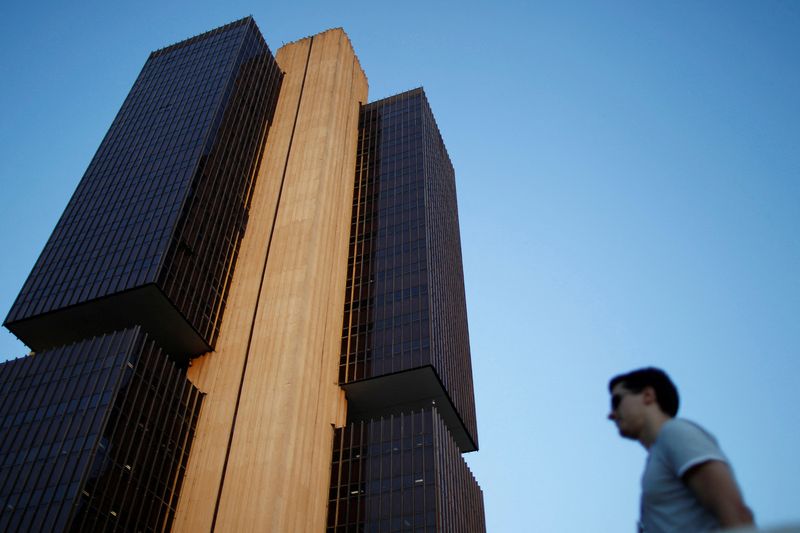 © Reuters. FILE PHOTO: A man stands near the headquarters of the central bank in Brasilia September 22, 2011. REUTERS/Ueslei Marcelino/File Photo

MEXICO CITY (Reuters) - Brazil's central bank will hike its key rate by 50 basis points next week, a Reuters poll showed on Friday, matching an increase at its last meeting following a year of aggressive moves to combat inflation still running in double digits.

So far this year the central bank has raised rates four times, by 150 basis points, then in two consecutive 100 basis point moves, and then by a smaller half-point in June.

Next week's move, if expectations are met, could reinforce the view an aggressive monetary tightening campaign that began in March 2021 is nearing an end. Rates will have risen by 1,175 basis points from 2.0% early last year.

"We believe the committee should not close the door for another hike in the September meeting, and instead remain data dependent," analysts from Morgan Stanley (NYSE:MS) stated in a note and pointed out that the latest relief in inflation numbers might not last.

But the BCB nonetheless is in a different spot from others around the world that are employing aggressive policy moves to tackle price pressures.

The U.S. Federal Reserve and the Bank of Canada last raised rates by 75 basis points and 100 basis points, respectively. Fed Chair Jerome Powell said on Wednesday another "unusually large" increase in interest rates may be appropriate at the institution's next meeting.

Nonetheless, asked about the outlook for Brazil's central bank policy for the next 12 months, 13 of 19 economists saw the outlook for rates still tilted to the upside, four saw the stance as neutral and two expected an easing.

If inflation expectations for the next two years remain above target, there is a chance that the central bank might increase its rate to even higher levels, Mauricio Nakahodo from MUFG noted.