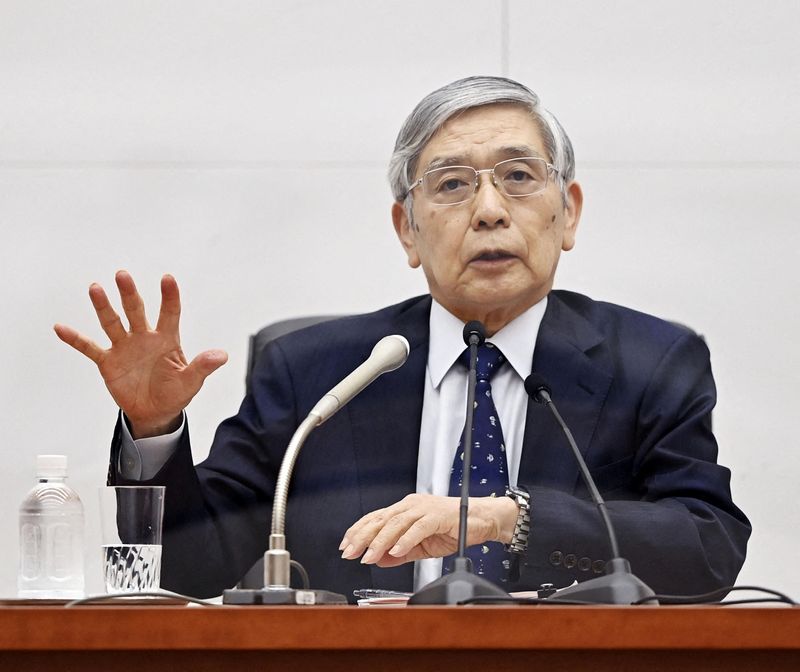 TOKYO (Reuters) -Bank of Japan Governor Haruhiko Kuroda said on Friday wages must rise by around 3% for inflation to sustainably hit the bank's 2% target, stressing the need to avoid raising interest rates until the economy strengthens enough to further drive up pay.

Kuroda said core consumer inflation, which hit a 40-year high of 3.6% in October, was rising "quite a bit" but will likely slow back below 2% in the next fiscal year, as the impact of soaring fuel and raw materials costs dissipates.

With uncertainty over Japan's economic outlook extremely high, the central bank must focus on supporting growth with an ultra-loose policy until wages rise more, he said in semi-annual testimony to parliament.

Japan's nominal wages rose 2.1% in September from a year earlier, marking the fastest pace since 2018 but below the recent rise in inflation above 3%, a sign that households' purchasing power was being crippled by broad price hikes.

"We'll continue with our monetary easing to support the economy and achieve our 2% inflation target in a sustained, stable fashion backed by wage growth," he said.

Kuroda has repeatedly called for the BOJ to keep monetary policy ultra-loose, drawing criticism from some opposition lawmakers who blame Japan's low rates for weakening the yen and pushing up the cost of imports.

Some lawmakers and academics have called for reviewing a joint statement the government and the BOJ signed in 2013, which holds the central bank responsible for achieving 2% inflation with ultra-easy monetary policy.

"I don't see the need now to review the statement," Kuroda said, brushing aside the possibility of watering down his pledge to maintain an ultra-loose policy until 2% inflation is sustainably achieved.