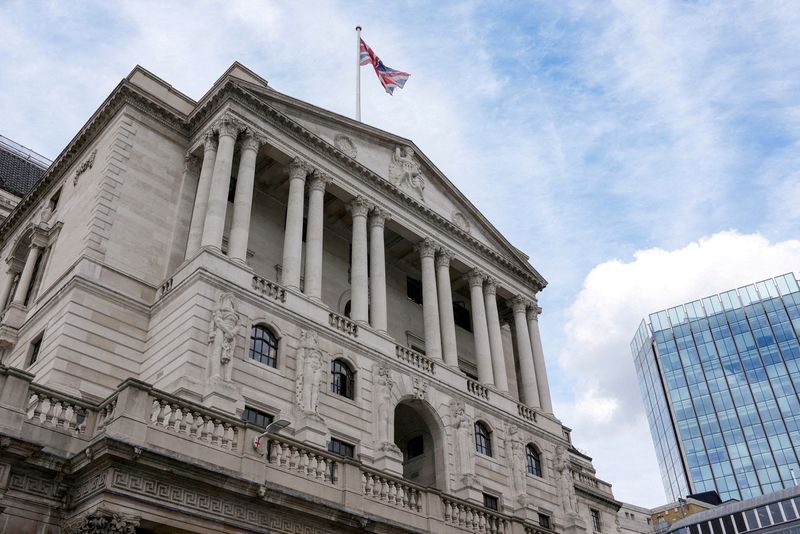 By Andy Bruce and David Milliken

LONDON (Reuters) -The Bank of England will not accept interference with the system of paying interest to banks from reserves issued by the central bank, BoE Chief Economist Huw Pill said on Thursday, pushing back against talk that change is needed.

Some former BoE officials have said the central bank should alter its system of paying interest to banks on its 950 billion pounds ($1.15 trillion) of reserves, the vast majority of which the BoE issued to finance its quantitative easing programme.

The idea is that reducing the amount of interest paid on reserves - effectively a transfer of public-sector money to commercial banks - would reduce the acute pressure on the public finances at a time of recession and high inflation.

Pill on Thursday said he was not a fan of the idea.

"From the Bank's point of view, from a monetary policy perspective, we want to be able to set Bank Rate and have it transmit through the money market effectively," Pill said at a conference hosted by King's College London (KCL).

"Anything that interferes with that is something that I think the Bank cannot accept."

Pill's comments are likely to be interpreted as a warning to the government, which ultimately decides how interest on reserves are paid.

Commercial banks are paid interest on the reserves by the BoE at whatever is the BoE's current interest rate - just 0.1% a year ago, but 3% now and likely to rise further.

Whereas the BoE made profits on QE from its government bond purchases when interest rates were low - worth 120 billion pounds over the last decade, transferred to the government - now it makes losses because the interest paid on reserves exceeds income from its QE bond holdings.

Last week official budget forecasters said the government looks on course to send the BoE more than 130 billion pounds over the next six years to cover those losses.

Former BoE deputy governors Paul Tucker and Charles Bean have suggested that the structure of paying reserves could be altered to reduce these payments, although Bean has said a tax on banks would be a simpler way to do it.

However, another former BoE rate-setter, Gertjan Vlieghe, said on Thursday it would be a "disaster" to stop paying interest on reserves, even partially - citing recent concerns about Britain's institutional credibility.

"Think about outside investors looking at the UK ... This is a really, really bad signal to send," Vlieghe told the KCL conference.

"If you want to tax the banks, fine, just put a tax on them, rather than saying: 'I owe you a lot of money - and as we know, when you owe money you pay interest on it - (but) I'm just not going to pay it.' That's a default in my book."