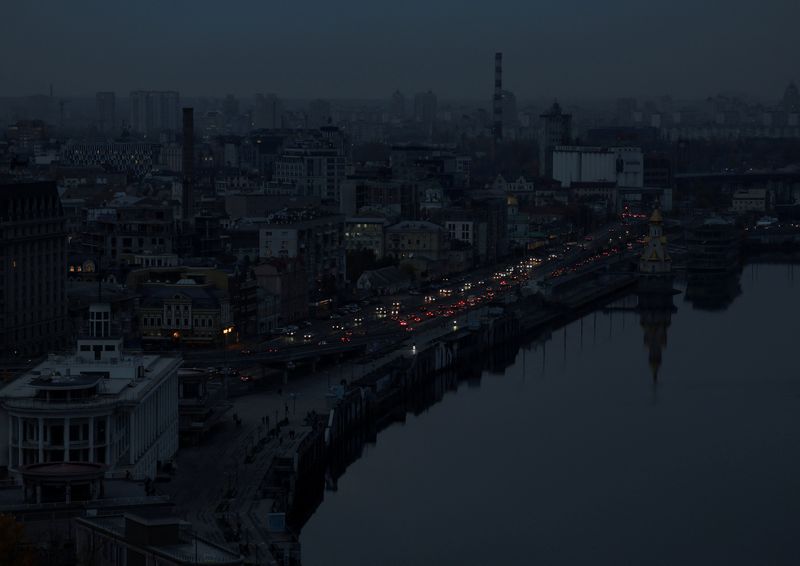 "Two years of quarantine, a year of war - bring on the aliens already," said Revutskyi, head of technology at a stylish co-working space in Kyiv that could soon find itself reliant on power generators if Russian air strikes continue.

Having endured a pandemic and then the economic crunch that followed Russia's Feb. 24 invasion, Ukrainian businesses are struggling to adapt to widespread blackouts that have become a feature of daily life.

Russian forces have increasingly fired missiles at critical infrastructure such as power plants and substations as their losses on the battlefield mount, forcing providers into power cuts to preserve grid stability and complete repairs.

Officials said Tuesday's wave of attacks was the largest in nine months of war. Russia has said that the strikes on Ukraine are aimed at military and energy infrastructure.

For businesses, particularly small and medium-sized enterprises (SMEs) that comprised around 60% of the Ukrainian economy and accounted for some 40% of tax revenue before the invasion, regular outages mean lost income and the inability to plan ahead.

Kateryna Markevych, lead expert of economic and social programmes at the Razumkov Centre think-tank in Kyiv, said SME activity had "significantly worsened" since the Russian strikes began in mid-October.

She added that many are being forced to splurge on accessories like generators or to make expensive concessions to retain customers.

Those lacking financial "safety cushions", or that are unable to secure favourable lines of credit in Ukraine's war-ravaged economy, could suspend operations or close altogether, she said.

Revutskyi said his co-working space, Kooperativ, had attracted new visitors since advertising the fact that it was serviced by two different power lines and internet providers, allowing it to avoid most outages.

But ultimately, he said, that influx would not offset the cost of running either of their two generators for an extended period of time if they needed to.

"Yes, we're surviving," said Revutskyi inside the lofted space. "But this isn't business."

Some larger enterprises appear to be better equipped to cope with the uncertainties.

But smaller businesses, especially those in the service industry, are under more pressure, often dependent on factors like client loyalty and a break from the landlord.

Sashko Borovsky, who co-owns two hip Kyiv cafes and runs another, said his businesses had benefited from both. The agility afforded to him by having a small staff also helped.

"Hate, fury - these emotions last for a few minutes," said Borovsky, describing the first moments after a Russian air strike that knocks out power. "Then you clear them and begin to think constructively."

But his projects generate far less income during outages, and while he holds weekly tactical meetings he is unable to plan his finances more than six weeks in advance.

Some experts warn that stabilising Ukraine's energy grid will be a long-term effort.

Oleksandr Kharchenko, director of the Energy Industry Research Center in Kyiv, estimated this week that it would be up to six weeks before it was repaired well enough for most customers to experience minimal or no cut-offs.

"But this is only assuming there are no further attacks," he told a briefing on Wednesday, a day before fresh Russian strikes on energy facilities and a defence plant.

Businesses in cities closer to the fighting, meanwhile, are more acutely affected by the flight of potential customers.

Oleksandr Chumak, president of the Association of Private Employers in Kharkiv, estimates the city's population of more than 1 million has plummeted to around 600,000 today.

"This makes it impossible for some of them to survive," he said.

Chumak added that 12% percent of businesses that had left Kharkiv have already decided against returning, and another 21% would only come back if it was safe and they could secure enough financing.

'I'VE MADE PEACE WITH THIS'

Still, both Borovsky and Revutskyi said many Ukrainians were now conditioned to a range of difficulties, so neither they nor their colleagues were panicking yet. Kyiv's military successes had also helped sustain a sense of purpose among the population.

A survey by Ukrainian market research firm Gradus found that 65% of businesses believed active fighting would be over by the end of 2023 at the latest. The poll was conducted in early November and included 203 respondents representing Ukrainian small, medium and large businesses.

For now, Borovsky said he was more preoccupied by his and others' mental health than potential economic losses he might incur.

"This is what I can control in that very moment - not the future of my business," he said. "I've made peace with this, and it's become easier for me."