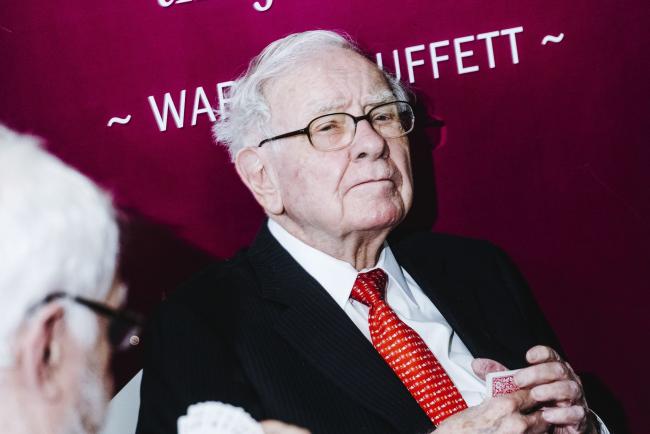 © Bloomberg. Warren Buffet, chairman and chief executive officer of Berkshire Hathaway Inc., plays bridge at an event on the sidelines of the Berkshire Hathaway annual shareholders meeting in Omaha, Nebraska, U.S., on Sunday, May 6, 2019. The annual shareholders' meeting doubles as a showcase for Berkshire's dozens of businesses and a platform for its billionaire chairman and CEO to share his investing philosophy with thousands of fans.

(Bloomberg) -- Berkshire Hathaway Inc . (NYSE:BRKa) is about to give investors a look at how the conglomerate is handling spiraling inflation, rate hikes and a market downturn that’s weighed on some of its largest holdings.

Warren Buffett’s Berkshire is set to report second-quarter results Saturday, and the sharp sell-off that’s dogged markets in the first half of this year is likely to take a chunk out of the company’s stock portfolio and its own book value as a result, according to analysts.

While the metric isn’t the be-all, end-all for the firm, investors do use it as shorthand for the conglomerate’s performance, and weakness there is likely to grate on them.

“We can look back at Berkshire’s portfolio and market moves and expect a pretty significant sequential deterioration,” said Meyer Shields, an analyst with Keefe Bruyette & Woods Inc. “For better or worse -- I think worse, personally -- people look at book value as the valuation basis for Berkshire, and if book value shrinks, that will make the stock look less attractive.”

Market turbulence isn’t the only headwind. With inflation running hot, declines at Berkshire’s operating businesses in areas including real estate and auto insurance -- where inflation is likely to increase the cost of claims -- could outweigh gains reaped by the company’s energy and rail units.

Insurers that already reported earnings say they’ve been hit hard by rates and inflation, drawing investor attention to how Berkshire’s businesses like auto insurance firm Geico, the second-largest private passenger auto insurer in the US, and Gen Re will fair.

Buffett said earlier this year that he couldn’t predict the trajectory of inflation over the coming months or years. Still, he’s seen price increases across his businesses. “It swindles almost everybody,” he said of inflation at that time.

“The operating businesses are really a microcosm for the broader economy,” said Cathy Seifert, an analyst with CFRA Research. “They are diversified, but again, the diversification doesn’t necessarily insulate them from inflation because there’s really few sectors that are immune.”

Results are landing a little more than three months after shareholders gathered in Omaha, Nebraska, for the company’s first annual meeting since the start of the pandemic. Billionaire investor Buffett used the gathering to tout an aggressive buying spree that included the purchase of insurance company Alleghany (NYSE:Y) Corp., an expanded stake in Chevron Corp. (NYSE:CVX) and shares in companies including HP Inc (NYSE:HPQ).

Notably, Berkshire has speedily bought up shares in Occidental Petroleum Corp (NYSE:OXY)., and now holds 19.5% of the energy company’s shares outstanding. That’s raised questions about whether Berkshire views the energy firm as an acquisition goal, though that sort of insight is rarely included in the company’s quarterly results.

Here’s what else to watch this quarter:

Buffett had increasingly leaned on buying back Berkshire stock as one way to put money to work in a competitive dealmaking environment. Berkshire bought back a total of $27.1 billion in 2021, the highest annual level since he began aggressively repurchasing stock in 2018, as the company struggled to deploy near-record levels of cash.

It slowed its roll on share repurchases during the first quarter with just $3.2 billion. With the market off of pandemic-era highs, repurchases could wane with potential deals in sight.

“You could see maybe fewer shares repurchased than people want,” Shields said. “There are increasingly more attractive uses of capital.”

Buffett loves a bargain, and while the market turbulence may knock Berkshire’s stock portfolio, it could also prove a buying opportunity.

After facing questions from investors about why he didn’t take advantage of the downturn when the pandemic took hold, Buffett amped things up in the first quarter. He and his investing deputies went on Berkshire’s biggest buying spree in at least a decade, hoovering up about $41 billion of net purchases in the three-month period.

Buffett, who’s now 91, confirmed last year that Berkshire Vice Chairman Greg Abel is set to take over as CEO whenever he departs. Analysts say it’s unlikely the company will provide more details on top-level succession plans over the weekend, with few expecting indications that Buffett or his long-time business partner, 98-year-old Charlie Munger, will step down.

Alleghany CEO and former Berkshire insurance executive Joe Brandon could emerge as the logical successor to Ajit Jain, who runs the conglomerate’s insurance operation, according to Seifert.

“Warren Buffett still has sort of a soft spot for Joe Brandon. He holds him in high regard,” Seifert said. “As it relates to maybe not top-level succession, but a couple of rungs down, there is a new little wrinkle.”