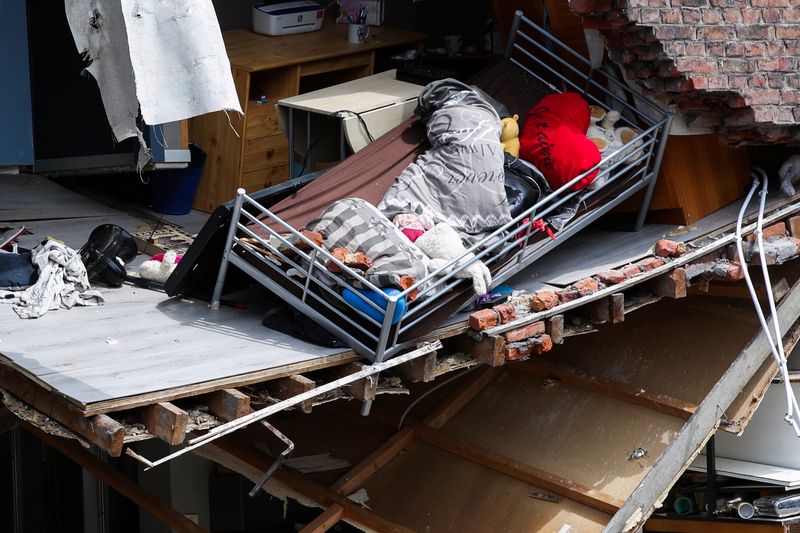 © Reuters. FILE PHOTO: A view of a bed and personal stuff inside a destroyed building at an area affected by floods, following heavy rainfalls, in Pepinster, Belgium, July 17, 2021. REUTERS/Yves Herman

By Carolyn Cohn and Tom Sims

LONDON/FRANKFURT (Reuters) -Reinsurance losses from the recent European floods are likely to total $2-3 billion, Berenberg analysts said on Monday, but the bank and industry experts said overall losses could be much higher.

Flooding has devastated parts of Western Europe since last Wednesday, with the German states of Rhineland Palatinate and North Rhine-Westphalia, as well as parts of Belgium, among the worst hit.

"The European floods are estimated to have cost the reinsurance industry several billions of dollars - we estimate between $2-3 billion," Berenberg said in a client note.

Other experts on Monday were scrambling to put a price tag on the total damage.

"It would be the most damaging heavy rain event that Germany has ever experienced," he said.

For others, it was too early to make a call other than to say the damage would cost several billion euros.

Kai Schroeter, a researcher with GFZ German Research Centre for Geosciences in Potsdam, said important data sources to estimate damage were still not available, including maps of flooded areas and questions about other "cascading impacts" like oil spill.

"The situation is quite complex," he said.

Berenberg also said overall losses would likely greatly exceed insured losses, with only around 45% of buildings in Germany insured against flood and heavy rain. In Belgium, such policies were standard so insurance coverage for the flooding was likely to be higher, the bank added.

Severe weather in Europe between June 17 and 30 had already caused estimated insurance losses of a record $4.5 billion in the region, surpassing $4.3 billion set by Storm Andreas in 2013, insurance broker Aon (NYSE:AON) said in a report earlier this month.