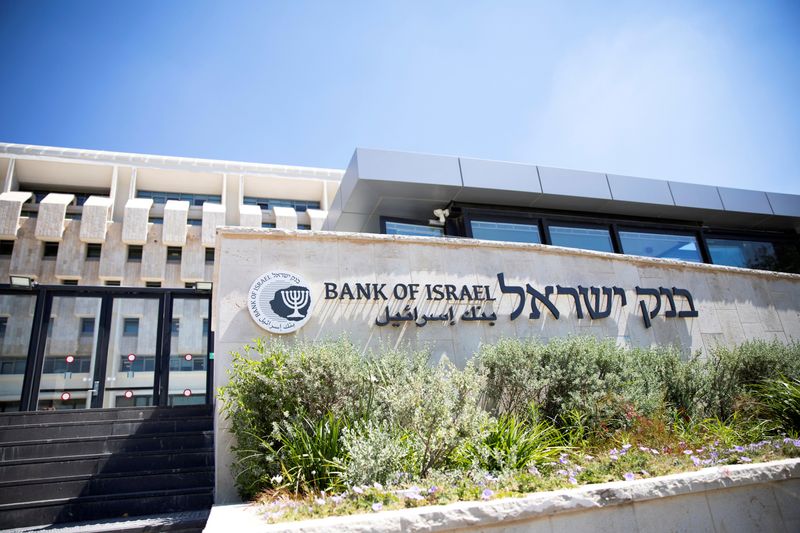 By Steven Scheer and Ari Rabinovitch

JERUSALEM (Reuters) -The Bank of Israel on Monday raised its benchmark interest rate by half a point, the sixth straight meeting it has increased rates, citing inflation above 5%, strong economic growth and a tight labour market.

The central bank lifted its key rate to 3.25% - its highest level since September 2011 - from 2.75%. In April, policymakers began aggressively raising the rate from 0.1%.

However, after two successive increases of three-quarters of a point in August and October, the central bank opted for a half-point this month.

"The Israeli economy is recording strong economic activity, accompanied by a tight labour market and an increase in the inflation environment," the central bank said.

"The (monetary) committee has therefore decided to continue the process of increasing the interest rate" and the future pace will be determined by economic growth and inflation data.

Israel's annual inflation rate rose to 5.1% in October from 4.6% in September and was just shy of a 14-year high of 5.2% in July - well above the government's 1%-3% annual target range and fuelling public anger at spiking living costs.

Yet the central bank noted inflation expectations in a year's time were within the target range.

At the same time, Israel's economy grew an annualised 2.1% in the third quarter from the second quarter, slower than a 7.3% pace in the prior three months. On Monday, official data showed Israel's jobless rate rose to 4.3% in October from 3.9% in September.

The Bank of Israel expects the economy to grow 6% in 2022, slowing to 3% growth next year.

After its rate decision in early October, Bank of Governor Amir Yaron told Reuters that he saw rates peaking at "3 plus percent" in a signal the tightening cycle was close to running its course.