Bank of England probes the persistence of UK's inflation surge 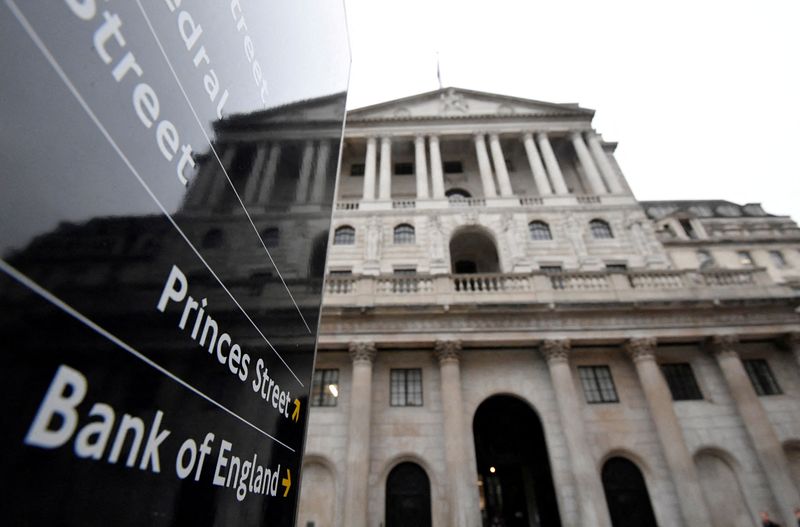 LONDON (Reuters) - The Bank of England says it will act forcefully if needed to stop the surge in inflation from turning into a long-term problem, meaning it could deliver a rare half-percentage point interest rate rise as soon as this week.

Here are some of the things that Governor Andrew Bailey and his colleagues will be looking as they assess the persistence of inflation pressures ahead of their next scheduled monetary policy announcement at 1100 GMT on Thursday.

Measures of inflation expectations and prices charged by companies have slowed recently but core pay has risen.

BoE's rate-setters might feel that they should raise rates by 50 basis points after other central banks pushed up borrowing costs sharply in recent weeks, despite the risk of an economic slowdown or a recession.

Britain's main inflation measure hit a 40-year high of 9.4% in June, prompting some economists to push up their forecast for inflation's peak to 12%. But central banks typically worry just as much about expectations for future inflation.

The BoE might take some comfort from a recent drop in how much consumers think prices will rise in the years ahead.

A survey by U.S. bank Citi and pollsters YouGov published on Monday showed expectations among the public for inflation in five to 10 years - the measure the BoE looks at most - fell in July for the third time in four months, although at 3.8% it remained high by historical standards.

Another survey by Bank of America (NYSE:BAC) published on July 12 showed five-year inflation expectations falling to their lowest in almost a year.

A measure of expectations in financial markets for inflation in five to 10 years' time hit its lowest since April 2020 last week but has risen since then.

If high inflation expectations become entrenched, they could lead to higher pay demands that may in turn fuel more inflation in future.

Growth in salaries has accelerated but much of the increase is due to one-off bonuses to attract or retain staff as employers struggle to find candidates to fill their jobs.

Pay including bonuses grew by 6.2% in the three months to May, up from about 3% just before the COVID-19 pandemic but down from the two previous monthly readings and lagging inflation.

Regular pay growth edged up to 4.3%, above its immediate pre-pandemic levels of around 3-4%.

As well as via pay, high inflation could also become embedded in the economy if companies keep on pushing up their prices in response to rising costs.

Increases in prices charged by firms, as measured by the S&P Global/CIPS Purchasing Managers Index, rose by the most since records began in 1999 in April. But that pace, while still high by historical standards, slowed a bit in May and June and cooled more significantly in July.

Separate data from the Office for National Statistics has shown a fall in early July in the proportion of businesses expecting to increase their prices.