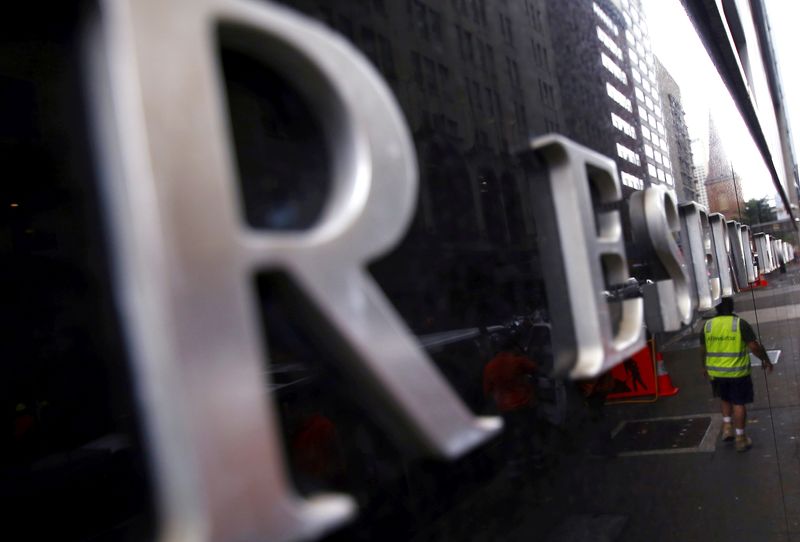 © Reuters. FILE PHOTO: A worker is reflected in a wall of the Reserve Bank of Australia (RBA) head office in central Sydney, Australia, March 1, 2016. REUTERS/David Gray/

SYDNEY (Reuters) -Australia's central bank on Tuesday raised interest rates for a fourth month running but tempered guidance on further hikes ahead as it forecast faster inflation but also a slowdown in the economy.

Wrapping up its August policy meeting, the Reserve Bank of Australia (RBA) lifted its cash rate by 50 basis points to 1.85%, marking an eye-watering 175 basis points of hikes since May in the most drastic tightening since the early 1990s.

Yet, RBA Governor Philip Lowe also made the outlook for policy more conditional.

"The Board expects to take further steps in the process of normalising monetary conditions over the months ahead, but it is not on a pre-set path," said Lowe.

That was taken as a dovish move by markets given Lowe had repeatedly stated the RBA Board wanted to get rates to a neutral level of at least 2.5%, where it theoretically would neither stimulate nor retard economic growth.

Investors reacted by knocking the local dollar down 0.6% to $0.6977, while three-year bond futures climbed 10 ticks to 97.270 as the market trimmed bets on how far rates would ultimately rise.

Lowe also outlined the RBA's new economic forecasts, saying consumer price inflation was now expected to peak around 7.75%, compared with 7% previously and 6.1% in the June quarter.