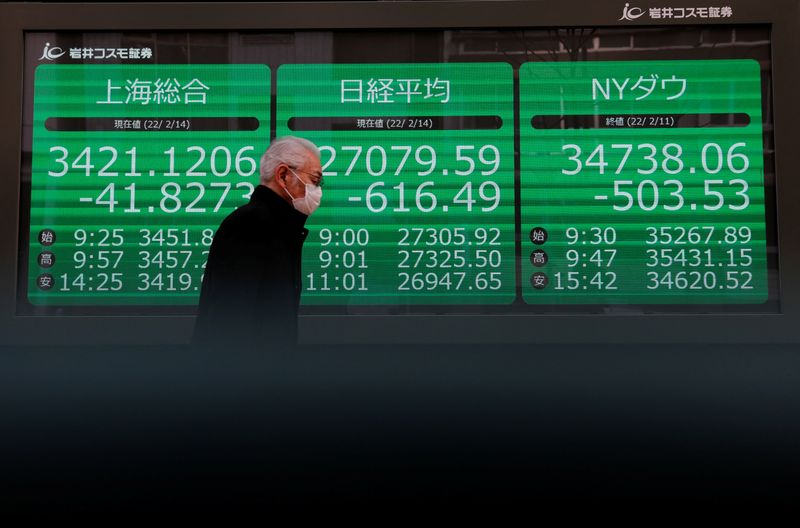 TOKYO (Reuters) - Asia stocks continued a decline from Wall Street on Tuesday, and U.S. long-term Treasury yields sank to a four-month low, pulling the U.S. dollar down against the yen and other currencies as investors worried about the risk of global recession.

There were also jitters about an escalation in Sino-U.S. tension with U.S. House of Representatives Speaker Nancy Pelosi set to begin a visit to Taiwan against the objections of China, which regards the self-governed island as a breakaway province.

Australian equities declined amid an uncertain outlook for commodity demand - which also weighed on crude oil prices - while the local dollar hovered near its highest versus its U.S. counterpart since mid-June with the central bank widely expected to deliver a third consecutive half-point interest rate hike later in the day.

The Australian and South Korean equity benchmarks suffered losses of about 0.3% each, while Japan's Nikkei tumbled 1.17%.

The week began with China, Europe and the United States reporting weakening factory activity, with that in the U.S. decelerating to its lowest level since August 2020.

"Data releases over the past 24 hours have provided further evidence the global economy is slowing," National Australia Bank (OTC:NABZY) strategist Rodrigo Catril wrote in a note to clients.

"Signs of a slowdown are building" in the United States, while "China's reopening activity burst is over," he said.

The benchmark 10-year U.S. Treasury yield fell as low as 2.53% in Tokyo trade, the lowest since April 5, amid wagers the slowdown could spur the U.S. Federal Reserve to ease its foot off the policy-tightening pedal. The bonds also benefited from safety-seeking demand before Pelosi's Taiwan visit, analysts said.

The Taiwan dollar slipped to its lowest level in more than two years on the weaker side of 30 per U.S. dollar.

Analysts polled by Reuters expect the Reserve Bank of Australia to hike by 50 basis points both on Tuesday and again at its next meeting in September as it races to rein in inflation.

Market participants also see a half-point bump later as a certainty, and have priced an additional 37 basis points of tightening for the September decision.