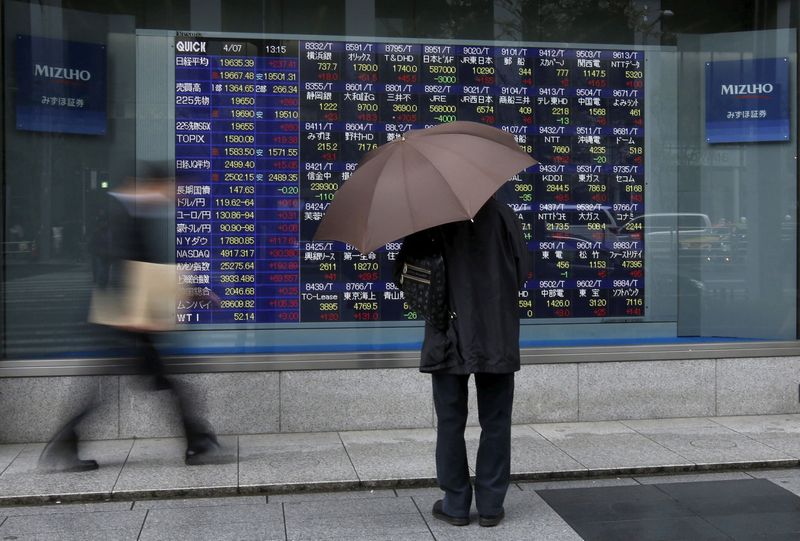 © Reuters. FILE PHOTO: A man holding an umbrella looks at an electronic stock quotation board outside a brokerage in Tokyo April 7, 2015. REUTERS/Issei Kato

Those concerns ultimately overcame hopes on Wall Street that high inflation might be peaking, pushing the S&P 500 close to confirming a bear market on Thursday, at nearly 20% off its January all-time high.

In an interview later in the day, U.S. Federal Reserve Chair Jerome Powell said that the battle to control inflation would "include some pain". And he repeated his expectation of half-percentage-point interest rate rises at each of the Fed's next two policy meetings, while pledging that "we're prepared to do more".

MSCI's broadest index of Asia-Pacific shares outside Japan was up 1.5% from Thursday's 22-month closing low, trimming its losses for the week to around 3%.

"We had some pretty big moves yesterday, and when you see those big moves it's only natural to get some retracement, especially since it's Friday heading into the weekend. There's not really a new narrative that's come through, " said Matt Simpson, senior market analyst at City Index.

"I think there comes that point where you run out of sellers. I'm not really certain that this is going to be a buying rally at the moment, possibly a short-covering rally ahead of the weekend."

The moves higher in equities were mirrored in slipping U.S. Treasuries, with the benchmark U.S. 10-year yield edging up to 2.8895% from a close of 2.817% on Thursday.

"Within the shape of the U.S. Treasury curve we are not seeing any particularly fresh recession/slowdown signal, just the same consistent marked slowing earmarked for H2 2023," Alan Ruskin, macro strategist at Deutsche Bank (ETR:DBKGn), said in a note.

The dollar index, which tracks it against a basket of currencies of other major trading partners, edged down about 0.1% to 104.64. But the greenback was stronger against the yen , which traded at 128.95 per dollar after hitting a two-week peak of 127.5 hit overnight.

The European single currency was 0.15% firmer at $1.0395 after trading lower earlier in the day.

Cryptocurrency bitcoin also turned higher, cracking through $30,000 after the collapse of TerraUSD, a so-called stablecoin, drove it to a 16-month low of around $25,400 on Thursday.

In commodities markets, oil prices were higher against the backdrop of a pending European Union ban on Russian oil, but were still set for their first weekly loss in three weeks, hit by concerns over inflation and China's COVID lockdowns slowing global growth.