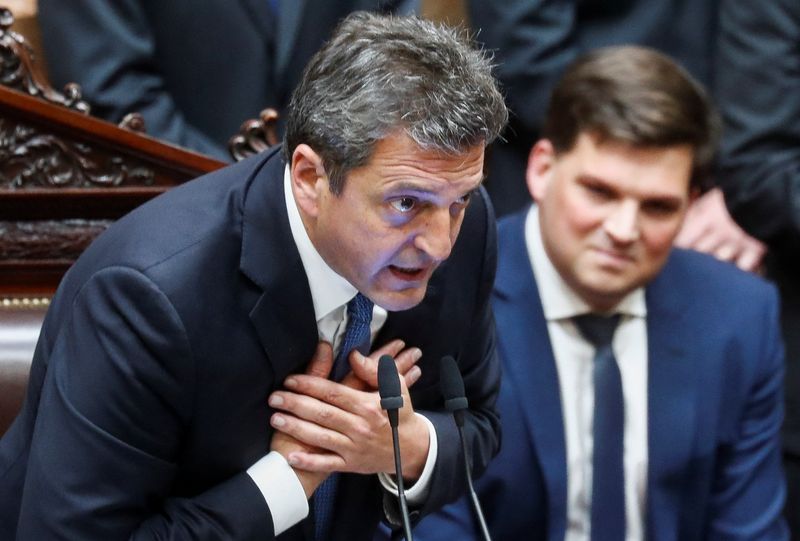 © Reuters. FILE PHOTO - Argentina's President of the Chamber of Deputies Sergio Massa presents his resignation in front of the Parliament before being sworn-in as the new Economy Minister, in Buenos Aires, Argentina August 2, 2022. REUTERS/Agustin Marcarian

BUENOS AIRES (Reuters) - Argentina's next economy minister, Sergio Massa, formally takes the reins of his newly-dubbed "superministry" on Wednesday, with expectations that he will announce spending cuts to calm markets amid a deepening economic crisis.

The South American country's large fiscal deficit, exacerbated by years of overspending, raging inflation, high debt and an ailing peso currency all await Massa as he becomes Argentina's third economic chief in just the past month.

A former congressional leader and lawyer from the ruling Peronist coalition, Massa is scheduled to be sworn in around 5 p.m. local time (2000 GMT) in Buenos Aires. He is due to then make a speech where new spending cuts as well as measures to boost dwindling foreign reserves are expected to be announced.

Local markets appeared encouraged on Wednesday ahead of the expected announcements. Argentina's main S&P Merval stock index was up 0.93% in morning trading before falling back to just above the previous day's close.

On Tuesday, the index gained nearly 1%.

The center-left governing coalition's warring factions have united behind Massa, seen by many as perhaps President Alberto Fernandez's last chance to staunch economic bleeding that has hurt the government's popularity ahead of next year's presidential vote.

"The economy is in a difficult situation, with a very complicated global context," Juan Manzur, Fernandez's chief of staff, told reporters. "But in spite of all our problems, we have confidence in him."

Massa is set to lead a vastly expanded economy ministry, in which the agriculture, production and trade secretariats will answer to him. Economy minister Martin Guzman abruptly resigned in early July and Silvina Batakis only lasted a few weeks after him in the role.