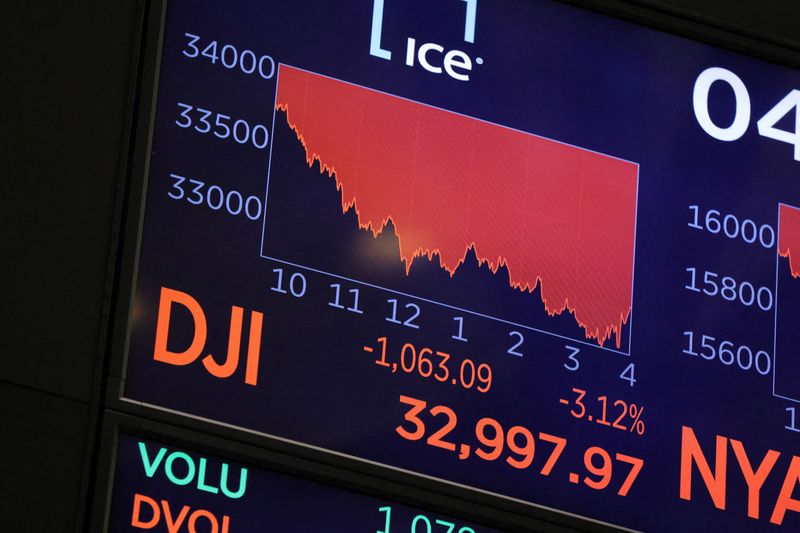 © Reuters. FILE PHOTO: The Dow Jones Industrial Average is displayed on a screen after the close of the day's trading at the New York Stock Exchange (NYSE) in Manhattan, New York City, U.S., May 5, 2022. REUTERS/Andrew Kelly

NEW YORK (Reuters) - Expectations of a hawkish Federal Reserve are dimming Wall Street’s outlook for stocks, with some investors now bracing for a potential bear market in the benchmark S&P 500 index.

A bear market - often thought of as a 20% or more decline from a high - would mark the end of the pandemic-era rally that sent stocks to record levels on the back of unprecedented stimulus from the Federal Reserve.

After falling more than 2% Monday, the S&P 500 was recently around 16% below its high reached Jan. 3 as it struggles through the worst four-month start to a year since 1939. The Nasdaq Composite index reached bear market territory in March and is down nearly 26%.

Though a bear market is not a foregone conclusion, signs of souring sentiment are everywhere as the Fed tightens monetary policy to fight the worst inflation in nearly four decades.

U.S. equity mutual funds and exchange-traded funds notched $37 billion in outflows over the past four weeks, the biggest four-week total since late 2018, according to Goldman Sachs (NYSE:GS). Analysts at Deutsche Bank (ETR:DBKGn) in April forecast a recession accompanied by a 20% S&P 500 drop in 2023, while BofA Global Research strategists last week warned of “rate shock,” predicting the current decline in stocks will continue.

Bearish sentiment in a weekly poll taken by the American Association of Individual Investors stood at 52.9% the week that ended May 4, well above the average rating of 30.5%, while BofA’s survey of fund managers last month showed optimism regarding global growth at an all-time low.

"The Fed has been as slow to respond to inflation as they’ve ever been, and that is leaving me seriously negative on equities," said David Wright, co-founder of $9.6 billion asset manager Sierra Investments.

Wright sees some parallels in the currency economic scenario to 1981, when high inflation forced the Fed to embark on a series of aggressive rate hikes, pushing the economy into recession. He has slashed his holding of equities and is moving into municipal bonds in preparation for a months-long bear market.

The Federal Reserve announced a 50 basis point hike last week and signaled that it will raise rates by 50 basis points at its next two meetings. Investors are currently pricing in a total of 209 basis points in tightening this year, putting the central bank on track for its most aggressive tightening path since 1994.

Sameer Samana, senior global market strategist at Wells Fargo (NYSE:WFC), said the S&P 500 has a one in three chance of falling into a bear market if it slipped below what he saw as a technical support level of 4,100, a level it fell below on Monday.

"It’s conceivable the S&P 500 needs to establish a bottom" that would take it into a bear market, given that the index hit 70 new records last year without more than a 5% pullback, he wrote Friday.

Overall, there have been 14 bear markets since 1945, with stocks losing an average of 36% over 289 days, according to data from Hartford Funds.

While not all bear markets have coincided with recessions, every recession since 1968 has prompted a bear market, according to data from CFRA Research. Goldman Sachs analysts recently put the chances of recession in the next year at 35%.

Not all strategists see sustained losses ahead.

Jonathan Golub at Credit Suisse (SIX:CSGN) lowered his year-end target price for the S&P 500 down to 4,900 from 5,200 last week, a move that would imply a nearly 22% gain from the current level of the index and a roughly 3% gain for the year.

Analysts at Truist Advisory Services downgraded their market targets last month but have not grown more negative in the most recent decline, wrote Keith Lerner, the firm's co-chief investment officer.

"There has been a pretty good reset in valuations and investor expectations, and a large degree of Fed tightening is already priced into the market," he wrote.

Others, however, believe the Fed’s hyper-focus on inflation makes recession more likely and will continue pounding stocks.

"Inflation means the Fed must tighten until it breaks the economy or the market," said Michael Harnett, chief investment strategist at Bank of America (NYSE:BAC). "Until it does, asset prices must reset lower."