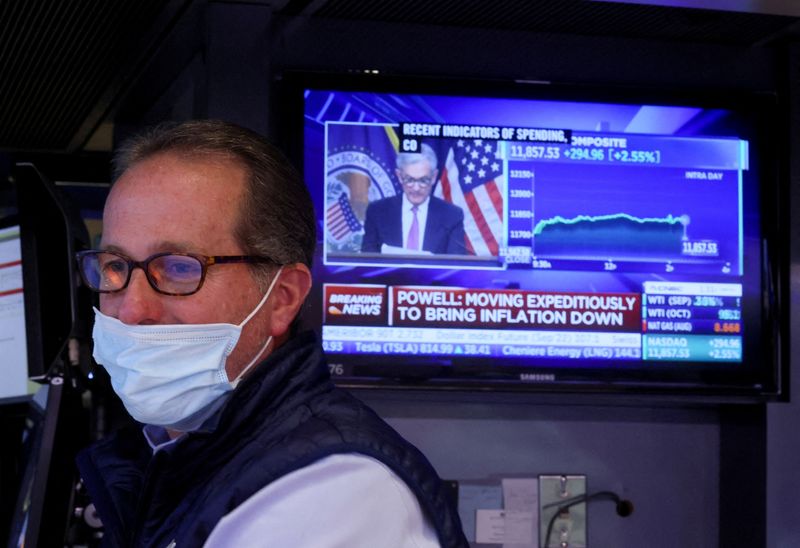 NEW YORK (Reuters) - A roaring rebound in U.S. corporate bonds is being met with skepticism by some investors, who believe the gains may be short-lived as recession fears dampen the outlook for the $10 trillion market.

Hopes that the Federal Reserve will be less aggressive than previously anticipated in its fight against inflation helped drive a powerful rebound across markets in recent weeks, fueling big gains in many of the assets that had suffered during a sell off in the first half of 2022.

Some investors believe the rally could falter if it becomes clearer that the Fed's series of jumbo-sized rate hikes are slowing economic growth. Others worry that the Fed's reduction of its balance sheet, known as quantitative tightening, could present another obstacle for credit in weeks ahead.

"I don't think we're out of the woods, but we're not as deep in the woods as we were a few months ago," said Eric Theoret, global macro strategist at Manulife Investment Management.

Theoret believes credit will likely weaken again as evidence of a slowing economy mounts, albeit not beyond lows it had seen earlier in the year.

Some Fed officials in recent days have pushed back on the idea that the central bank was on the cusp of a dovish pivot, a narrative that helped accelerate gains in asset prices after its monetary policy meeting last week.

More evidence on whether the 225 basis points in economic tightening the Fed has already delivered is slowing growth is on the way, as investors await U.S. jobs data on Friday and inflation numbers next week. Signs that the economy continues to run hot could bolster the case for more hawkish monetary policy and send bond yields higher, weighing on prices.

Analysts at Barclays (LON:BARC) expect credit spreads to widen to "recession levels" of 200-210 basis points for investment-grade and 850-900 basis points for high-yield debt. Those spreads, which show how much investors are willing to pay for riskier bonds over Treasuries, are currently at around 150 and 460 basis points, respectively.

"Financing conditions are tightening quickly both in the U.S. and globally, and economic growth is well below trend. This is usually challenging for companies and credit spreads. We do not believe this time will be different," they wrote.

Even with last month's rally, investment grade bonds have notched a total return of -12% year-to-date while high yield bonds have returned -9%, putting both on track for their worst year since 2008, Refinitiv data showed.

U.S. investment-grade and high-yield bond funds experienced inflows of roughly $9 billion and $4 billion in July, respectively, a month that included deals such as a $10 billion offering by Bank of America (NYSE:BAC) and a $7 billion one by JPMorgan (NYSE:JPM). The category has notched $67 billion in outflows this year, according to fund flow data from EPFR.

High yield bonds, less sensitive to shifts in interest rates, have attracted around $14 billion year-to-date. Appetite for riskier credit tends to dry up when investors sense an economic slowdown approaching.

Some investors also worry that the Fed's reduction of its $9 trillion balance sheet, which it kicked off last month as part of its efforts to cool the economy, could adversely affect credit markets. The Fed has embarked on quantitative tightening once before, in 2017, and investors have speculated on how the process could affect asset prices this time around.

Greg Zappin, portfolio manager at Penn Mutual Asset Management, said QT was one of the factors leading him to a risk-averse position in his portfolio. "It's a very relevant factor, it's only the second time we've experienced it and it's happening in a different kind of economic backdrop," Zappin said.